God Enabled Him to be a Prayer Warrior 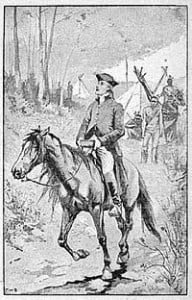 It is amazing that one life lived for God could  inspire not just his own life and soul, but  countless others as well.  And yet that was the case with David Brainerd [1718-1747].  A recipient of the Great Awakening in New England in the early seventeen hundreds, David Brainerd was ordained by the Presbytery of New York as a missionary  to the Delaware Indians.  A sickly man, he would eventually die of tuberculosis, but not before he penned a memorable diary which illustrated his deep piety in the things of God. Listen to some of his thoughts, written on January 3, 1745.

“Being sensible of the great want (lack) of divine influences and the outpouring of     God’s Spirit, I spent this day in fasting and prayer to seek so great a mercy for myself, my poor people (e.g. the native population) in particular, and the Church of God in general.  In the morning, I was very lifeless in prayer and could get scarce any sense of God.  Near noon, I enjoyed some sweet freedom to pray that the will of God might in every respect become  mine, and I am persuaded that it was so at that time in some good degree.  In the afternoon, I was exceedingly weak and could not enjoy much fervency in prayer, but felt a great degree of dejection which, I believe, was very much owing to my bodily weakness and disorder.”

If you read carefully the above quotation from David Brainerd, you would have observed that this was an all-day prayer session by this home missionary.  And it was a prayer which was answered, for within a year, there was an outpouring of sovereign grace among the Indians, beginning with his own interpreter and his wife. Eventually God’s Spirit would bring an extraordinary spiritual awakening to the inhabitants of the towns and villages which later on became the northeastern states of the United States. And his diary continues to be an inspiration to modern day Christians, countless of whom have entered into Christian service as a result of its reading.

Words to Live By:  What is prayer?  Prayer is an offering up of our desires unto God, in the name of Christ, by the help of His Spirit, with confession of our sins, and thankful acknowledgment of his mercies.  (Larger Catechism of the Westminster Standards, No. 178)

Through the Scriptures: Genesis 6 – 9

Through the Standards:  The what, how, and why of the Scriptures of the Old and New Testaments

WCF 1:2  “Under the name of Holy Scripture, or the Word of God written, are now contained all the books of the Old and New Testaments, which are these, OF THE OLD TESTAMENT Genesis. Exodus. Leviticus. Numbers. Deuteronomy. Joshua. Judges. Ruth. 1 Samuel. 2 Samuel. 1 Kings. 2 Kings. 1 Chronicles. 2 Chronicles. Ezra. Nehemiah. Esther. Job. Psalms. Proverbs. Ecclesiastes. The Song of Songs. Isaiah. Jeremiah. Lamentations. Ezekiel. Daniel. Hosea. Joel. Amos. Obadiah. Jonah. Micah. Nahum. Habakkuk. Zephaniah. Haggai. Zechariah. Malachi. OF THE NEW TESTAMENT The Gospels according to Matthew. Mark. Luke. John. The Acts of the Apostles. Paul’s Epistles to the Romans. 1 Corinthians. 2 Corinthians. Galatians. Ephesians. Philippians. Colossians. 1 Thessalonians. 2 Thessalonians. 1 Timothy. 2 Timothy. Titus. Philemon. The Epistle to the Hebrews. The Epistle of James. The first and second Epistles of Peter. The first, second, and third Epistles of John. The Epistle of Jude. The Revelation of John. All which are given by inspiration of God to be the rule of faith and life.

For further reading on the life of David Brainerd:
Primary sources: Brainerd’s Diary remains in print and can be obtained here or on the web in various digital formats here.

Secondary sources, additional (more scholarly & to be read with discretion):