The Root of the Presbyterian Apostasy 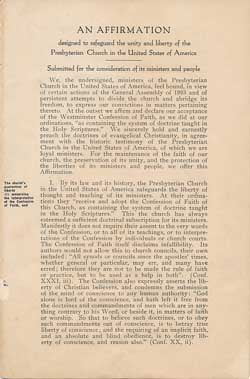 The General Assembly of the Presbyterian Church in 1923 had repeated the earlier high court’s affirmations of five essential truths which made up the fundamentals of Christianity.  They were the inerrant Scripture, the Virgin Birth, the substitutionary atonement of Christ, His literal bodily resurrection from the dead on the third day, and supernatural miracles.  However the very next year, on January 9, 1924, one hundred and fifty Presbyterian elders issued an affirmation in Auburn, New York which stated that these five fundamentals were not necessary and essential doctrines for the church.  Eventually the number of ministers to sign it would increase to 1,294 ordained ministers, about ten per cent of the clergy on the rolls of the Presbyterian church.

Through the Standards: The Clarity of the Scriptures

WCF 1:7
“All things in Scripture are not alike plain in themselves, nor alike clear unto all: yet those things which are necessary to be known, believed, and observed for salvation, are so clearly propounded, and opened in some place of Scripture or other, that not only the learned, but the unlearned, in a due use of the ordinary means, may attain unto a sufficient understanding of them.”

For more on the Auburn Affirmation—the text of the document, along with links to a number of biblically conservative responses—click here.