A Scottish Covenanter in the Lord’s Army 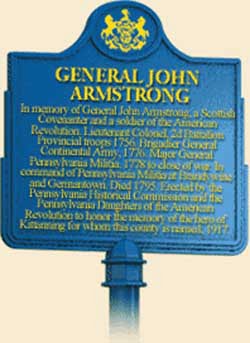 There was no other man among the early settlers of Cumberland Valley, Pennsylvania, who had more influence in directing its early destiny than John Armstrong.  Born in 1717 in Northern Ireland to James Armstrong and Jane Campbell, he was educated there as a surveyor.  Emigrating to the new world, he began to survey for the Penn family who owned the colony of what later on became Pennsylvania.  He and another man laid out the first plan for the town of Carlisle and later on, Cumberland County.  He, as a Presbyterian, joined and was a ruling elder of the First Presbyterian Church, in Carlisle, Pennsylvania.

« For more on General Armstrong and the location of the historical marker erected in his memory, click here.

It was said of him that there was united in his character a strong sense of religious responsibility that rarely blends with military sentiment, and yet, in him, it did blend easily.   As one said,  “he belonged  to that race of Scottish Covenanters, who in conflict to which persecution trained them, never drew the sword or stuck a mortal blow without the confidence that agencies higher and stronger than human means were battling on their behalf, and that their sword, whether bloodless or bloody, was always ‘the sword of the Lord.'”  So, when going into a military action, John Armstrong was “always known to kneel in humble devotion and earnest prayer, and afterwards, never seemed to doubt the battle’s fury that the work of blood was sanctified to some higher purpose.”

The initial campaigns were nothing less than furious battles.  When Indian raids against the settlers turned vicious, Col. John Armstrong took an army of 280 men in 1756 on a raid about 200 miles west of Carlisle, known as Kittaning.  They there succeeded in destroying the Indian village, killing its chiefs and many of their Indian followers.  For this, he was rewarded by the Corporation of Philadelphia with a piece of plate and a silver medal.  Two years later, he marched with 2700 men on the Forbes Expedition.  Their approach caused the French to destroy Fort Duquesne and leave what is now Pittsburgh.  On  this venture, Armstrong became a good friend with another militia leader, Colonel George Washington.

In the early days of the American Revolution, Armstrong was appointed on March 1, 1776 a Brigadier General in the Pennsylvania militia.  Later, the Continental Congress appointed him the same rank in the national army.  He used his civil engineer background to prepare the city of Charleston, South Carolina to withstand a siege against it.  Returning to his duty with the Pennsylvania militia, he became a Major General.  He participated in the Battles of Brandywine and Germantown.  Old age was catching up with him, along with old wounds, so he gave up active command and returned to Carlisle.

From 1777 to 1780, and again in 1787 and 1788, he was a member of the Continental Congress.  His leadership skills were not just limited to national office.  He was on the first board of trustees of the Presbyterian college of Dickinson, in Carlisle.  He went to be with the Lord, on March 9, 1795.  On his tombstone in Old South Cemetery, it states “eminently distinguished for patriotism, valor and piety.”

Gen. Armstrong is buried in Carlisle, PA. A photograph of his grave site can be seen here.

Words to Live By: In whatever calling you have been given, the sovereignty of God in all things is to be trusted  with confidence and hope.

Through the Scriptures: Deuteronomy 4 – 6

Through the Standards: The Covenant of Grace in the Confession

WCF 7:3
“Man, by his fall, having made himself incapable of life by that covenant, the Lord was pleased to make a second, commonly called the covenant of grace; wherein He freely offers unto sinners life and salvation by Jesus Christ; requiring of them faith in Him, that they may be saved, and promising to give unto all those that are ordained unto eternal life His Holy Spirit, to make them willing, and able to believe.”

Remembering Our Fathers and Brothers:
On this day in 1985, the Rev. Alexander Kay Davison passed into glory. Born in 1903 in Ballymena, North Ireland, Rev. Davison had a long and fruitful ministry. Immigrating to the United States in 1927, he graduated from Westminster Theological Seminary in 1931 and was ordained by the Presbytery of Moose Jaw in the Presbyterian Church in Canada. He later transferred his credentials into the PCUSA in 1935, becoming the pastor of the Vineland, NJ church, and then led a portion of that congregation into the newly formed Presbyterian Church of America (later, OPC) in September of 1936. Among his honors, he served as the Moderator of the fifth General Assembly of the OPC (February 1939). He was pastor of Grace OPC in Buechel, KY from 1941-45 and a chaplain in the U.S. Army, 1945-48. In 1948 a new call brought him into the United Presbyterian Church of North America, and then into the UPCUSA. Rev. Davison was honorably retired in 1971, but was among those who left the UPCUSA in 1980 over the Wynn Kenyon case, and thus became a founding member of the Presbytery of the Ascension in the PCA.