A Joshua to the Southern Presbyterians

To many Christians, the name of John Leighton Wilson might be a common name of no real significance.  But to Southern Presbyterian Christians, he stands out as a spiritual giant of the faith. 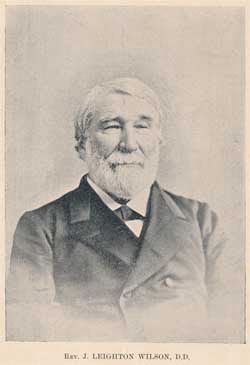 Born on March 25, 1809 to Scot-Irish parents who had come to South Carolina in 1734, John Wilson grew up in a Christian home.  Reared in the Bible and the Westminster Shorter Catechism, he attended Union College in New York, graduating in 1829.  Two-thirds of his class from that college entered the ministry, and John Wilson was no different.  Entering Columbia Seminary in 1830, he began to sense a call to be a missionary in Africa.  One reason for that call was that he believed the South as a people owed it to Africa to send the gospel there as so many of her black children were in bondage in the south.  That inherent hatred of slavery would be proven in his later years in Africa.

Marrying in 1834 Miss Mary Elizabeth Bayard, who was also committed to the missionary call, they were the first American missionaries sent to Africa.  They were to labor there in two locations for eighteen years, learning the language, translating the Bible into it, wondrously proclaiming the gospel, and writing about the land for future missionaries to follow their labors.

Two major accomplishments in addition characterized his work there.  While there, he noticed the slave ships carrying their human cargo away from the shores of their homeland.  Wilson wrote a friend in England concerning the situation and by God’s providence, the Prime Minister of England came into possession of a copy of Wilson’s letter and subsequently had printed ten thousand copies in pamphlet form.  As a result, English war vessels were sent, forcing slave traders to give up their business of buying and selling slaves.

The other accomplishment was his discovery of the existence of the  “gorilla,” a name which was given by John Wilson to this animal.

After eighteen years in Africa, Mr and Mrs Wilson came home to the Board of Foreign Missions to superintend the work of missions through the world.  That happy association was interrupted by the War Between the States in 1861.  Though John Wilson had worked for the abolition of slavery in Africa, he cast in his lot with his southern brothers.  Immediately, he was placed in charge of missions for the Presbyterian Church of the Confederacy.  His spiritual vision, even in the midst of a war footing, and especially after that civil war,  went out to many nations, including the Indian tribes of the west.  The gospel was not limited in any way by what transpired on earth.

Around 1885, both he and his faithful wife entered the gates of heaven.  On his tombstone in South Carolina where he grew up, there is one phrase which stands out.  It says simply “The Foreign Missionary.”

Words to Live By:  John Wilson once wrote, “I would rather live in the lowliest hut with  the enjoyment of God than in the most resplendent palace on earth without a hope of heaven.” He fulfilled that desire by his life.  What are your desires for your life?  Have you considered in whatever sphere of life He calls you, to be among those who are used by Him for His glory and the good of others?

Through the Standards: Christ’s Exaltation in His resurrection

WLC 52 — “How was Christ exalted in his resurrection?
A. Christ was exalted in his resurrection, in that, not having seen corruption in death, (of which it was not possible for him to be held,) and having the very same body in which he suffered, with the essential properties thereof, (but without mortality, and other common infirmities belonging to this life,) really united to his soul, he rose again from the dead the third day by his own power; whereby he declared himself to be the Son of God, to have satisfied divine justice, to have vanquished death, and him that had the power of it, and to be Lord of quick and dead; all which he did as a public person, the head of his church, for their justification, quickening in grace, support against enemies, and to assure them of their resurrection from the dead at the last day.”