March 3: Every Member a Worker

A Manual for Members

What should we expect ourselves and our fellow members to be doing for the Lord through our respective congregations?  Various answers might be forthcoming, but it is interesting what a famous congregation in the Bible Presbyterian Church specified were its members responsibilities to the Lord. 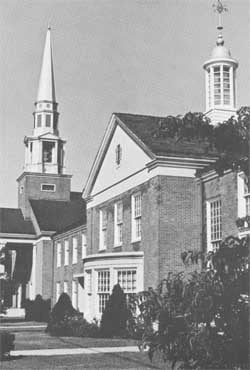 In a leaflet written on March 3, 1946, a pamphlet was published of the Collingswood, New Jersey, Bible Presbyterian Church.  After listing its pastoral staff, including the Rev. Carl McIntire, and recording  the names of the Session of Elders, Trustees, and Deacons, as well as specifying all the ministry opportunities of the church in home and abroad,  there was a section stating the purposes of its members.  It read:

“Every member a worker” is the idea for our church.  The church is falling short of its goal unless every member attends its services regularly and engages in at least one specific service or ministry.  Here is our program for every individual member:

Now, in conclusion, some of our readers, and even some of the ministers, might have objections to this list, but as you read them again, there are very few items which are not taught or inferred in the Bible as necessary traits of the disciples of the Lord Jesus.  Nevertheless, however we might think of it,  this is one congregation’s attempts over eighty years ago which sought to help its members by being faithful members of the local congregation to which they were committed.

Words to Live By: Let us seek to fulfill our promise as members of the local church to which we are committed, to  live as becomes the followers of Christ Jesus.

Through the Scripture: Deuteronomy 10 – 12

Through the Standards: The Manifestation of the Covenant of Grace

WLC 32 — “How is the grace of God manifested in the second covenant?
A. The grace of God is manifested in the second covenant, in that he freely provides and offers to sinners a Mediator, and life and salvation by him; and requiring faith as the condition to interest them in him, promises and gives his Holy Spirit to all his elect, to work in them that faith, with all other saving graces; and to enable them unto all holy obedience, as the evidence of the truth of their faith and thankfulness to God, and as the way which he has appointed them to salvation.”

The Rev. Donald J. MacNair died on this day, 3 March 2001. Born in 1922 and educated at Rutgers University and Faith Theological Seminary, his first pastorate was with the BPC church in Coatesville, PA. Answering a call to serve The Covenant Presbyterian Church in St. Louis, he oversaw the relocation of that church and helped to design its new building. From 1964-1982, Rev. MacNair served as the head of National Presbyterian Missions (NPM), the church planting arm of the RPCES. While it was Dr. Edmund P. Clowney who came up with the idea of the Joining & Receiving method of merger, it was Don MacNair who was widely recognized as the architect of J&R and who worked tirelessly to bring about the reception of the RPCES into the PCA in 1982. In effect, he worked himself out of a job, since the PCA already had in place a director for its Mission to North America, NPM’s counterpart. Not one to sit around, Dr. MacNair then formed Churches Vitalized, a ministry to struggling churches. Both the Donald J. MacNair manuscript collectionand the records of Churches Vitalized are preserved at the PCA Historical Center. The latter collection is awaiting processing at this time.

Also on this day, the Rev. Robert James Ostenson, one of the founding fathers of the PCA, entered his eternal reward on 3 March 2008. Born in 1922, he prepared for the ministry at Fuller Theological Seminary (BD, 1953) and was later awarded the Doctor of Divinity degree by Belhaven College in 1969. He was ordained by Mississippi Presbytery in 1953 and installed as the pastor of the Woodville and Gloster, MS churches, where he served for three years. At the time of the formation of the Presbyterian Church in America, he was serving as the pastor of Granada Presbyterian Church in Coral Gables, FL., 1965-1974. In his final pastorate, he returned to serve that church again, from 1987-1989.

And on this day, 3 March 1993, the Rev. John Galbreath Armes passed away. Born in 1918, his father was Roland K. Armes. John received his education at Hampden-Sydney College and Faith Theological Seminary before licensure and ordination by the Philadelphia Presbytery of the BPC. Rev. Armes served as a chaplain in the U.S. Navy, 1944-46 and was Assistant General Secretary of the Independent Board for Presbyterian Foreign Missions from 1946-51. Leaving that post, he served as a foreign missionary in Kenya from 1951-1982. He was honorably retired in 1984 by the Northeast Presbytery of the PCA.