A Helpful Book For All Home Libraries 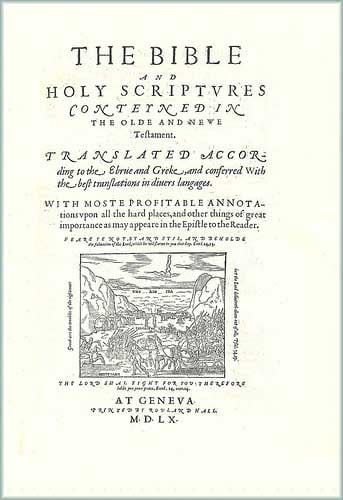 It was said that in most colonial homes in America, Presbyterians owned at least several books for use by and for their families.  The first one was, of course, the Bible.  And contrary to many expectations, that Bible version was not the King James Version, but rather the Genevan Bible.  Remember, the King James version was introduced because of the Reformed foot notes of the Genevan Bible.  That introduction was marked by mistakes, such as the inclusion of the Apocrypha into the first edition of the King James Version.  It was left out in the second edition, and indeed, to cause people to buy it, the printer of the version placed on the flyleaf “Authorized Version.”   All these caused the many Presbyterian and Reformed Christians to bring the Genevan edition to the shores of America.

A second book essential for early American immigrants was the Westminster Confession of Faith and Catechisms.  These were studied in many a home, with catechetical instruction and memorization being part and parcel of family devotions.

A fourth book would be a commentary, such as Matthew Henry’s Commentary on the Bible.  This would enable the husband and father of the home to explain the Word of God in daily devotions to the family members gathered morning and night.

In light of the existence of this  last book in colonial homes, this contributor would like to recommend to our readers the importance of having the book by Henry Alexander White, entitled “Southern Presbyterian Leaders 1683 – 1911” in their homes.  Reprinted by the Banner of Truth Trust, White’s book does an excellent job of making his readers familiar with the rich heritage of southern Presbyterian leaders.  Since all of the conservative Presbyterian and Reformed churches have significant churches and leaders today in the South, his roll call of men, movements, and events cannot be surpassed today.  So felt Dr. Henry White, when in his preface written on April 15, 1911,  “the work and character of Presbyterian people of our Southern Commonwealth” must be known by all Christian Presbyterians.  Therefore, it is recommended that you purchase this book for your home libraries to know and understand the past great people in the southern church.  As we see what make them the men and women of their day and age, it will help us to follow their example of commitment to the Word of God and testimony of Jesus Christ.

Words to Live By:  Remember Joshua in obedience to the Lord placed stones on the banks of the Jordan to not forget the Lord’s power in enabling Israel to pass by faith that seeming obstacle into the promised land, so we need to be reminded of those who have gone before so that we can by faith successfully confront anyone or anything who and which might confront us today.

Through the Standards:  Definition of effectual calling, according to the catechisms

WLC 67 — “What is effectual calling?
A.  Effectual calling is the work of God’s almighty power and grace, whereby (out of his free and special love to his elect, and from nothing in them moving him thereunto) he does, in his accept time, invite and draw them to Jesus Christ, by his word and Spirit; savingly enlightening their minds, renewing and powerfully determining their  wills, so as they (although in themselves dead in sin) are hereby made willing and able freely to answer his call, and to accept and embrace the grace offered and conveyed therein.”;

WLC 68 — “Are the elect only effectually called?
A. All the elect, and they only, are effectually called: although others may be, and often are, outwardly called by the ministry of the word, and have some common operations of the Spirit; who, for their willful neglect and contempt of the grace offered to them, being justly left in their unbelief, do never truly come to Jesus Christ.”;

WSC 31  — “What is effectual calling?
A. Effectual calling is the work of God’s Spirit, whereby, convincing us of our sin and misery, enlightening our minds in the knowledge of Christ, and renewing our wills, he does persuade and enable us to embrace Jesus Christ, freely offered to us in the gospel.”