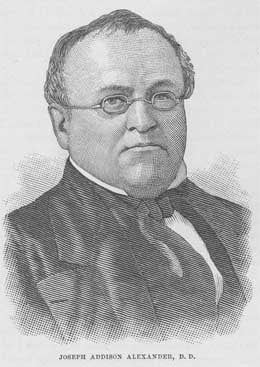 Joseph Addison Alexander was the third son of the Rev. Archibald Alexander and his wife Janetta (Waddel) Alexander. In modern terms, Joseph was home schooled, and he developed an insatiable thirst for knowledge, pursuing one subject after another as it caught his attention. Eventually he grew to become another of that esteemed early faculty of the Princeton Theological Seminary.

His biographer says of J.A. Alexander that

“…in the midst of all his laborious and diversified pursuits he saved time for the most heart-searching exercises in his closet. He gave himself up to daily communion with his God. He might neglect everything else, but he could not neglect his private devotions. In point of fact he neglected nothing. He moved as by clockwork. The cultivation of personal piety, in the light of the inspired word, was now with him the main object that he had in life. The next most prominent goal that he set before himself was the interpretation of the original scriptures; for their own sake, and for the benefit of a rising ministry, as well as for the gratification he took in the work. The Bible was to him the most profoundly interesting book in the world. It was in his eyes not merely the only source of true and undefiled religion, but also the very paragon among all remains of human genius. He knew great portions of it by heart….But more than this, the Bible was the chief object of his personal enthusiasm; he was fond of it; he was proud of it; he exulted in it. It occupied his best thoughts by day and by night. It was his meat and drink. It was his delectable reward. There were times when he might say with the Psalmist, “Mine eyes prevent the night watches that I might meditate in thy word, I have rejoiced in the way of thy precepts more than in great riches.” He succeeded perfectly in communicating this delightful zeal to others. His pupils all concur in saying that “he made the Bible glorious” to them.


Words to Live By: The Bible is the very Word of God—His self-revelation to His people. J.A. Alexander seems to have made Psalm 1 the model and guide for his life. If you have never memorized a portion of Scripture, this Psalm is short and is a great place to start. Setting it to memory, such that you can think on it at various times, will bring real profit.

1 Blessed is the man that walketh not in the counsel of the ungodly, nor standeth in the way of sinners, nor sitteth in the seat of the scornful.
2 But his delight is in the law of the LORD; and in his law doth he meditate day and night.
3 And he shall be like a tree planted by the rivers of water, that bringeth forth his fruit in his season; his leaf also shall not wither; and whatsoever he doeth shall prosper.
4 The ungodly are not so: but are like the chaff which the wind driveth away.
5 Therefore the ungodly shall not stand in the judgment, nor sinners in the congregation of the righteous.
6 For the LORD knoweth the way of the righteous: but the way of the ungodly shall perish.

Additional Notes for this day:
Professor J.G. Machen, lecturer, author and Bible scholar, delivered two addresses on Christianity at the dedication of the new home of the New York Bible Society in East Forty-eighth Street. [The Continent 53.17 (27 April 1922): 529.]

Through the Standards:  Act of justification is from the Triune God

WCF 11:4
“God did, from all eternity, decree to justify all the elect, and Christ did, in the fulness of time, die for their sins, and rise for their justification: nevertheless, they are not justified, until the Holy Spirit does, in due time, actually apply Christ unto them.”