April 28 : What’s In A Name?: PCUSA sues over the name PCofA 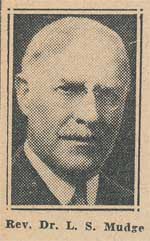 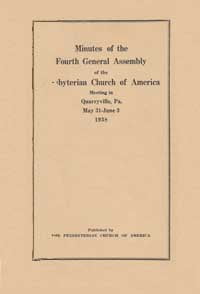 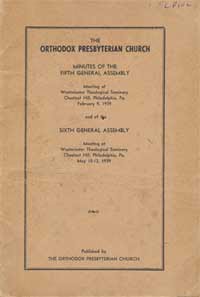 Through the Standards:   The nature of those justified who have been adopted

WSC 34  — “What is adoption?
A.  Adoption is an act of God’s free grace, whereby we are received into the number, and have a right to all the privileges, of the sons of God.”

Image sources : 1. Photograph of Lewis S. Mudge, newsclipping from the Syracuse Herald, 28 May 1936, p. 3, as found in Scrapbook no. 2, p. 110, in the Henry G. Welbon Manuscript Collection.
2. Cover image of the Minutes of the Fourth General Assembly of the Presbyterian Church of America, meeting in Quarryville, Pa., May 31-June 3, 1938.
3. Cover image of the Minutes of the Fifth General Assembly of the Orthodox Presbyterian Church, Meeting at Westminster Theological Seminary, Chestnut Hill, Philadelphia, Pa., February 9, 1939…
All scans prepared by the staff of the PCA Historical Center.