The meeting was called to order in the auditorium of the New Century Club in Philadelphia, Pennsylvania on June 11, 1936 at 2:35 p.m.  With those facts before you, this could be any gathering of any group of people for any purpose. But this meeting was unique in that it was the start of a new Presbyterian denomination. 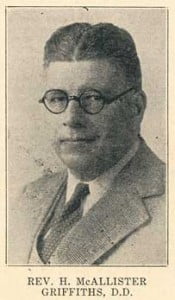 The next section of the opening address was highly important as it laid down the doctrinal, confessional, and ecclesiastical basis of the new church.  It stated, “We do solemnly declare (1) that the Scriptures of the Old and New Testaments are the Word of God, the only infallible rule of faith and practice, (2) that the Westminster Confession of Faith and Catechisms contain the system of doctrine taught in the Holy Scriptures, and (3) that we subscribe to and maintain the principles of Presbyterian church government as being founded upon and agreeable to the Word of God.” (Minutes, p. 4)  The minutes states that all teaching and ruling elders, and deacons, shall subscribe to the statement.

Dr. J. Gresham Machen was elected  the first moderator.  The Rev. Paul Woolley was elected clerk of the assembly. A committee was organized to  prepare a second General Assembly to be held on November 12 – 15 in Philadelphia. This committee would recommend which version of the subordinate standards the new church would receive and adopt, the  Form of Government, Book of Discipline, and Directory for the Worship of God.  Another committee was set up on Church Organization and Roll. The last committee established by this general assembly was that of Home Mission and Church Extension.

Pictured above, the meeting of the Second General Assembly of the Presbyterian Church of America. The photograph is part of the Allan A. MacRae Manuscript Collection at the PCA Historical Center. To my knowledge, no known photograph of their First General Assembly survives.
[With regrets, our scanner is not large enough to include several faces on the right side of the photo, including that of Dr. Cornelius Van Til, seated in the first row).]

Words to Live By: It was a good start.  Many challenges were ahead.  Faithful ministers who stood boldly for the faith would lose church buildings, manses, and pensions in the years ahead.  We, like them,  are always to look away from things that perish, and keep our hearts and minds set on Jesus Christ, the Author and Finisher of our faith.

Through the Scriptures: Ecclesiastes 4 – 6

Through the Standards:  Moral law prior to the fall according to the catechisms

WLC 92 — “What did God at first reveal unto man as the rule of his obedience?
A.  The rule of obedience revealed to Adam in the estate of innocence, and to all mankind in  him, besides a special command not to eat of the fruit of the tree knowledge of good and evil, was the moral law.”