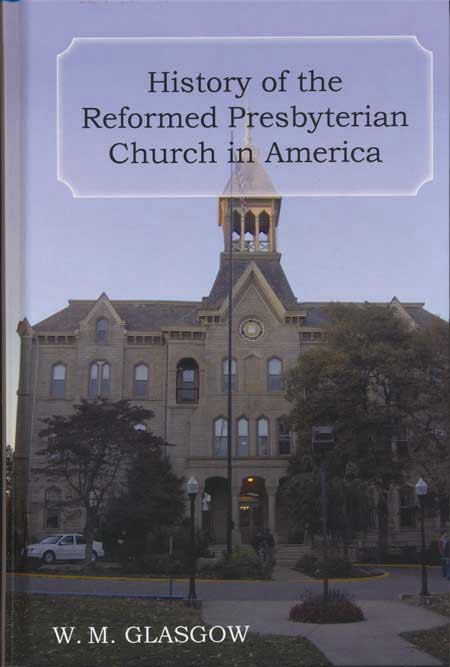 The young man needed a service project for his church or community to become an Eagle Scout.  What Nathaniel Pockras of Ohio eventually chose and finished will be of great service not only to the Reformed Presbyterian Church of North America ministers and members, but also to historic Presbyterians in general.  He printed on-line the 788 pages of the Rev. W. Melancthon Glasgow’s History of the Reformed Presbyterian Church, which was long out of print and extremely rare for any current minister or member to own one.

The original book was written with the approval of the Reformed Presbyterian Synod of America and by a resolution passed in its Session at Newburg, New York on June 8, 1887.  It was copyrighted by the author in 1888.  Its subtitle was “with sketches of all her ministers, congregations, missions, institutions, publications. etc, and embellished with over fifty portraits and engravings.”  Who said long titles are not in vogue?

How many of you know that Covenanter slaves were sent to these colonies, with conditions on the slave ships as bad as those which brought the Africans to our shores?  Rev. Glasglow brings you the background of that story now long forgotten by most Christians in the United States. In fact, it was that sorry history which caused the Reformed Presbyterian Church to be the first Presbyterian denomination which condemned slavery in our land. [See for instance Negro Slavery Unjustifiable, by Alexander McLeod]

The presence of banished Covenanter slaves in the colonies alongside those of the black race stolen from Africa have another possibility beyond those mentioned here.  This prompts us to ask where did the old negro spirituals arise from? They did not come from pagan Africa, that is for sure.  Did the circumstances of their plight in the American colonies as slaves come face to face sovereignly with the Light of the World, even Jesus?  Certainly, that took place.  But Jock Purves, in his book, Fair Sunshine, published by Banner of Truth Trust, writes of another possibility, when he says,  “there are seeming traces of time and melody  in these lovely spirituals which are reminiscent of the music of the old metrical Psalm-singing.” (page 49)  Did banished men and women of  Covenanter stock carry the gospel of redeeming love in both words and music to their companions in hard labor among the African slaves? (italics that of the author) It is an interesting thought. [For more on this theory, see the work of Yale professor Willie Ruff.]

And while Covenanters rose to grapple with the issues of the American Revolution and supported the fight for independence, do you realize that they did not accept the Constitution of the United States because it nowhere spoke of the kingship of Jesus Christ as Lord of this nation? For many years afterwards, Reformed Presbyterians would not vote, serve on juries, or held office. Only slowly did they moderate those convictions, at least in terms of practical outworkings.

Are you also aware of the fact that in their worship, they only sing the psalms without musical accompaniment? To their spiritual benefit, the local congregations of several other Presbyterian denominations have included RPCNA Psalters as an additional hymnbook in their pew racks. The PCA’s own Psalter is itself a cooperative work based in large part upon the RPCNA Psalter.

Words to Live By: While a small denomination, the Reformed Presbyterian Church of North America continues to have a vital place in the American Presbyterian tradition. Let us pray that their “tribe may increase,” for that can only be of benefit to us all.

Through the Scriptures: Proverbs 25 – 28

Through the Standards:  Proof texts of assurance of grace and salvation

2 Timothy 1:12
” . . .for I know whom I have believed and I am convinced that He is able to guard what I have entrusted to Him until that day.” (NASB)

1 John 3:14
“We know that we have passed out of death unto life, because we love the brethren.” (NASB)

Romans 8:16, 17
“The Spirit Himself bears witness with our spirit that we are children of God, and if children, heirs also, heirs of God and fellow-heirs with Christ. . . .” (NASB)