Countless Americans applaud General Thomas Jonathan “Stonewall” Jackson’s  abilities on the battlefield in America’s Civil War, or War Between the States. But many of those same Americans ridicule the spiritual side of this much admired military man.

Nowhere is this seen better than in his views on observing the Sabbath day, or Lord’s Day.  It is here that words like “fanatic” come to the fore in books and media reports of his character and conduct. Indeed at one point, his own wife, Mary Anna Jackson, a Presbyterian minister’s daughter, wrote him a letter which expressed concern that he had attacked Union troops at the battle of Kernstown, Virginia in April 1862, in violation of the Sabbath.  Jackson answered his wife with the following words: 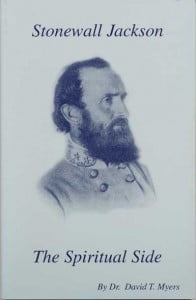 “You appear much concerned at my attacking on Sunday. I was greatly concerned too;   but I felt it my duty to do it, in consideration of the ruinous effects that might result from postponing the battle until the morning. So far as I can see, my cause was a wise one; the best that I could do under the circumstances, though very distasteful to my feelings; and I hope and pray to our Heavenly Father that I may never be circumstanced as on that day.  I believed that so far as our troops were concerned, necessity and mercy both called for the battle.  Had I fought the battle on Monday instead of Sunday, I fear our cause would have suffered; whereas, as things turned out, I considered our cause gained much from the engagement.”

In the above letter, and I have underlined the important phrase, you read the words “necessity and mercy.”  Any one who knows the sixtieth answer in the Shorter Catechism of the Westminster Standards will remember that “necessity and mercy” were two divine exceptions in the observance of the fourth commandment, given by Jesus Himself.  But, it may be asked, did Gen. Jackson know of these two exceptions in the catechism?  The answer is in the affirmative, because he had memorized the Shorter Catechism in his pre-war days in Lexington, Virginia with his wife, and he was a deacon in the Presbyterian Church of that city, which office required his acceptance of the Westminster Standards.

So under no circumstances did the military officer violate the spiritual standards of his convictions and religion. Necessity and mercy dictated his military moves on that day, the Lord’s Day, or the Sabbath.

Words to Live By: The world is always ready to condemn the actions of true Christians, if only to get the attention off of themselves and their sinful ways.  We must be sure to have solid biblical evidence to back everything we say and do, so as to not place a stumbling block before unbelievers.

Through the Standards: The requirements of superiors to inferiors

WLC 129 — “What is required of superiors towards their inferiors?
A.  It is required of superiors, according to that power they receive from God, and that relation wherein they stand, to love, pray for, and bless their inferiors; to instruct, counsel, and admonish them; countenancing, commending, and rewarding such as do well; and discountenancing, reproving, and chastising such as do ill; protecting, and providing for them all things necessary for soul and body; and by grave, wise, holy, and exemplary carriage, to procure glory to God, honor to themselves, and so to preserve that authority which God has put upon them.”