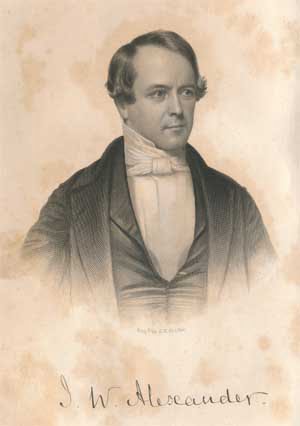 Born the eldest son of Archibald Alexander near Gordonsville, Virginia, in 1804, James was in a household filled with theological giants of the faith.  His father was the president of the Presbyterian  Hampden-Sydney College at that time.  But when schooling began for the son, his father had taken the pulpit of the Third Presbyterian Church in Philadelphia, Pennsylvania in 1807.  In 1812, the new seminary called Princeton began in New Jersey, and the family of the Alexanders moved there, so Archibald  Alexander could become the first professor of that new divinity school.

Young James graduated from the College of New Jersey in 1820.  And while he studied theology at Princeton Seminary from 1822 – 1824, he would not be ordained by the historic Hanover Presbytery until 1827, having first served about three years as a tutor. (This seems to have been a common practice in the 19th-century, where men would first serve as a tutor for several years before seeking ordination.). He began his pastoral ministry as stated supply of the Presbyterian church in Charlotte Court House, Virginia for a year, and was then pastor of that church for another year. The rest of his life and ministry had him in the college and seminary field of teaching at Princeton Seminary, interspersed with pastoral ministry in Trenton, New Jersey and New York City Presbyterian churches.

He was involved in some of the biggest seasons of revival and reformation during those middle decades of the eighteen hundreds.  The New York City prayer revival took place in his church in 1857, which then spread through the noon prayer meetings among many denominations and around the country.  In the midst of his ministry, the Old School New School division took place in the denomination. Through it all, James Alexander proclaimed Christ to the masses.

One of the highlights of his ministry was his hymn writing and translations. The most famous translation was the familiar words to “O Sacred Head, Now Wounded.” His translation from 1830 from Bernard of Clairvaux in the eleventh century, is the version most used by our churches today.

James in 1859 went with his wife back to his home state of Virginia to recover from a serious illness. On July 31, 1859, he went to Red Sweet Springs, Virginia, where he succumbed from his illness.  Before his death, he made the following comment:

“If the curtain should drop at his moment and I were ushered into the presence of my Maker, what would be my feelings?  They would be these. First, I would prostrate myself in the dust in an unutterable sense of my nothingness and guilt.  Secondly, I would look up to my Redeemer with an inexpressible assurance of faith and love.  There is a passage of Scripture which best expresses my present feeling: I know whom I have believed and am persuaded that he is able to keep that which I have committed unto him against that day.”

Words to Live By: As we contemplate that last comment of James Alexander on his death-bed, who among believers could not echo these words and thoughts?  We have no right from ourselves to gain heaven.  It is only through Christ’s love and forgiveness that we have been given the key to heaven’s door.  Christ Jesus is the object of our faith, and the only object.  Let that be your assurance both here, and hereafter.

Through the Scriptures: Nahum 1 – 3

Through the Standards:  The Sixth commandment: Sins forbidden

WLC 136 — “What are the sins forbidden in the sixth commandment?
A.  The sins forbidden in the sixth commandment are, all taking away the life of ourselves, or of others, except in case of public justice, lawful war, or necessary defence; the neglecting or withdrawing the lawful and necessary means of preservation of life; sinful anger, hatred, envy, desire of revenge; all excessive passions, distracting cares; immoderate use of meat, drink, labor, and recreations; provoking words, oppression, quarreling, striking, wounding, and whatsoever else tends to the destruction of the life of any.”