Google the name of Gordon Haddon Clark on the web, and reference after reference comes up for you to read.  One of them is from the PCA Historical Center, where his manuscript collection is peserved; a biographical sketch is posted there as well. 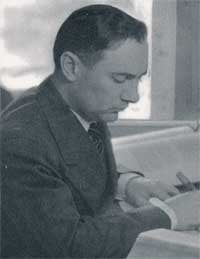 Gordon Clark had the advantage, after his birth in 1902, of being reared in a Christian home, and indeed being the son of the manse.   His father, the Rev. David Clark, was a graduate of Princeton Seminary in 1887, where he had studied under the great Reformed thinkers of that era.  Serving the Lord as a pastor back east, Gordon Clark  had  home training in the Westminster Shorter Catechism.  In addition, he had the opportunity to read  Reformed masters like Calvin, Warfield, and Hodge, from his father’s library.  Such a training would likely, and it did, find fruition in both the pastoral fields and on the educational campuses of the nation.

Dr. Clark served as a Professor of Philosophy at both the University of Pennsylvania and Wheaton College from 1929 – 1944.  It was on August 9, 1944 that he was ordained as a teaching elder in the Orthodox Presbyterian Church by the Presbytery of Philadelphia of that denomination.  Unhappily, that ordination was opposed by some in that church until finally Dr. Clark left the OPC to join the United Presbyterian Church of North America.

It was during this time that Dr. Clark became a faculty member of Butler University, serving as a Philosophy professor from 1945 to 1973.   Many of his best known books were written during this time at Butler University.  With the start of the year of 1974, Dr. Clark taught for a decade at Covenant College, while also teaching at Sangre de Christo Seminary in Colorado, and Reformed Episcopal Seminary in Philadelphia, Pa.

Words to live by:  A strong training at home, as Dr. Clark possessed, especially a training in the Westminster Shorter Catechism in younger years, is the missing note of many a covenant family.  But it is never too late to address that omission.  The pastors and Sessions of our Presbyterian congregations need to place that emphasis in the families of the congregation, even appointing a person, such as a retired teacher, to hear recitations of catechism answers each Lord’s Day.  Or heads of families, joined by their wives, need to train up their children in the Shorter Catechism.  It will be a gift which will never lose its influence for good in their hearts and lives.

Through the Scriptures: Jeremiah 13 – 16

Through the Standards: The ninth commandment: Sins forbidden

WLC 145  — “What are the sins forbidden in the ninth commandment?
A.  The sins forbidden in the ninth commandment are, all prejudicing the truth, and the good name of our neighbors, as well as our own, especially in public judicature; giving false evidence, suborning false witnesses, wittingly appearing and pleading for an evil cause, out-facing and overbearing the truth; passing unjust sentence, calling evil good, and good evil; rewarding the wicked according to the work of the righteous, and the righteous according to the work of the wicked; forgery, concealing the truth, undue silence in a just cause, and holding our peace when iniquity calls for either a reproof from ourselves, or complaint to others; speaking the truth unseasonably, or maliciously to a wrong end, or perverting it to a wrong meaning, or in doubtful or equivocal expressions, to the prejudice of truth or justice,; speaking untruth, lying, slandering, backbiting, tale bearing, whispering, scoffing, reviling, rash, harsh, and partial censuring; misconstruing intentions, words, and actions; flattering, vain-glorious boasting; thinking or speaking too highly or too meanly of ourselves to others; denying the gifts and graces of God; aggravating smaller faults; hiding, excusing, or extenuating of sins, when called to a free confession; unnecessary discovering of infirmities, raising false rumors, receiving and countenancing evil reports, and stopping our ears against just defense; evil suspicious; envying or grieving at the deserved credit of any, endeavoring or desiring to impair it, rejoicing in their disgrace and infamy; scornful contempt, fond admiration, breach of lawful promises; neglecting such things as are of good report, and practicing, or not avoiding ourselves, or not hindering what we can in others, such things as procure an ill name.”