A Family Heritage of Presbyterian Ministers — 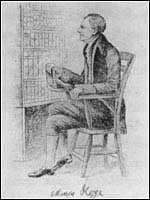 The easy answer is that the God of the Bible is sovereign and, as a result, He calls whom He will, not only to salvation, but also to service in His kingdom.  And so in this case, we simply have that God-ordained call to one family to produce sons who would in turn answer the call to gospel ministry.  And yet, there is more to it than that.  God ordinarily works through means, although he is not restricted to means.  And the means toward the God-glorifying end here was a family who was committed to gospel truths in the home, to say nothing of their Presbyterian church.