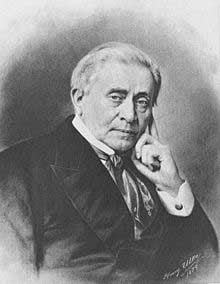 His pastor said at that time, “while human learning and science are pressing forward to do honor to him who was known and loved as a leader, I come, in the name of the Christian church, and in the name of my Savior, to place upon this casket a simple wreath, forming the words ‘JOSEPH HENRY, THE CHRISTIAN.'”

Through the Standards:  The reason for the death of forgiven saints

WLC 85 — “Death, being the wages of sin, why are not the righteous delivered from death, seeing all their sins are forgiven in Christ?
A.  The righteous shall be delivered from death itself at the last day, and even in death are delivered from the sting and curse of it; so that, although they die, yet it is out of God’s love, to free them perfectly from sin and misery, and to make them capable of further communion with Christ in glory, which they then enter upon.”