This day, January 30, marks the birth of Francis August Schaeffer, in 1912. 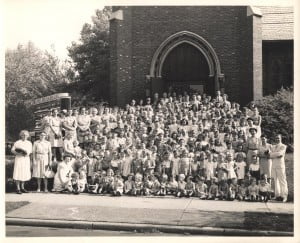 Dr. Francis A. Schaeffer’s early ministry is not all that well known. He began his studies at Westminster Theological Seminary, then transferred to, and graduated from, Faith Theological Seminary. Upon graduation, he answered a call to serve a small Presbyterian congregation in Grove City, PA. Arriving in Grove City in June, by July he had in place and began to implement Dr. Abraham Lance Lathem’s Summer Bible School program. Lathem’s program was intense. It met for five weeks, three hours each morning, was centered on Scripture and Catechism memorization, and had no hand-crafts! In two years time, the congregation grew from 18 to 105 members, largely because of Schaeffer’s emphasis upon ministry to children.

The PCA Historical Center has preserved a portion of a letter from Dr. Schaeffer in which he commends the Summer Bible School program:

For a long time I have been keenly interested in the ALL-BIBLE “SUMMER BIBLE SCHOOL”. Before I had a regular charge that interest was academic–the plan sounded splendid both as a means of Christian instruction and as a Church builder. When we were called to the Covenant Bible Presbyterian Church of Grove City, a Church of 18 active members meeting in the American Legion Hall, we put the plan to the test and found it more powerful than we had even guessed. We arrived in Grove City in June and in July with little other means of contact than door bell pushing, we had our first Summer Bible School. That first year with only 4 children in our Sabbath School, we had 135 children enrolled. The following three years we had Schools all of which had over 170 in them. There is no doubt in my mind that one of the greatest factors which God used in the Building of the Grove City Church to a congregation of 105 members with its own beautiful little building was the All-Bible “Summer Bible School”.

Educationally the school meets many needs. A great many of us long for an educational system that will bring our children to the Lord instead of taking them away. Modern unbelief has gained much of its control through the early planting of many of its men in educational centers. However, the setting up of Christian Schools is difficult and not many of us can achieve it. Never-the-less, in the pedagogically correct and Spirit empowered Summer Bible School course, we have a solution which each of us can effect.

As I have said, I have been impressed with the All-Bible Summer Bible School for a long time, but since I have been called to Chester as Associate Pastor and have gone over the remarkable record of the School in its world-wide scope, I am continually more certain that God has raised up nothing in our age that has surpassed this All-Bible Summer Bible School as a means of evangelization, as a bulwark against unbelief through the careful teaching of the Word of God, and as a builder of Church congregations that mean to stand “all out” for Fundamental, Supernatural Christianity.

The School was founded 30 years ago by Dr. Lathem, and uses No Handcraft; it is the Word of God and the Word of God only. There are records at hand of 100,000 conversions through it, and only God knows how many more have been reached for Christ that are not recorded. Before the Nationalistic blow against Fundamental Christianity in Japan there were 586 Schools in Korea alone. It is my firm conviction that the All-Bible Summer Bible School fills an increasingly important. . .”

[The letter ends there. Perhaps we will one day find the rest of that letter among some other collection.]

Words to Live By: Can there be any more important ministry than in raising up children in the saving grace and knowledge of Jesus Christ as Lord? What a blessing to be able to say that you never knew a time when you did not trust Christ for your salvation. And please don’t think that you have to wait to be able to talk with your children about spiritual matters. Patience and plain, simple language will overcome the barriers and even fairly young children can grasp their sinful condition and their need of Christ as their savior. Communicate the Gospel clearly, plainly, lovingly—not just by your words but especially by your actions—and wait in trusting faith on God’s time to bring about conviction, repentance and faith.

Image Source: The photograph above is from 1944, when Dr. Schaeffer was pastor of the First Bible Presbyterian Church of St. Louis, where ministry to children continued to play an integral part in his overall ministry to the Church. Scan prepared by the staff of the PCA Historical Center.