Simplicity marked the funeral service of the Rev. Dr. J. Gresham Machen in the Spruce Street Baptist Church, Philadelphia, Tuesday morning, January 5, 1937.  More than an hour before the service, people began to arrive, and by the time the service was to be begin every available space was taken.  People were standing all about the church, and individuals were turned away.  A reserved section in the center of the church was held for the student pallbearers, the immediate relatives, and the directors of Westminster Seminary

At exactly 10:30, eight students of Westminster Theological Seminary, acting as pallbearers, carried into the church the casket which was blanketed with green smilax, and across the top red roses formed a cross.  The casket, unopened, was placed in front of the pulpit which was surrounded on every side with beautiful floral sprays.

The congregation joined in singing the favorite hymn on which Dr. Machen had preached many ordinations for his students: 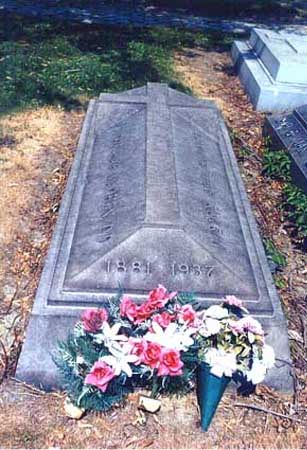 There is a green hill far away,
Without a city wall.
Where the dear Lord was crucified,
Who died to save us all.
We may not know, we cannot tell,
What pains he had to bear;
But we believe it was for us
He hung and suffered there.
He died that we might be forgiven,
He died to make us good,
That we might go at last to heaven
Saved by His precious blood.
There was no other good enough,
To pay the price of sin;
He only could unlock the gate
Of heaven and let us in
Oh dearly, dearly, has He loved,
And we must love Him, too,
And trust in His redeeming blood,
And try His works to do.

The benediction was pronounced and the two ministers led the procession from the building followed by the student pallbearers carrying the casket.  Familiar faces from all over the eastern part of the United States, and as far West even as Iowa, were seen.  These friends had come for a last farewell tribute to Dr. Machen.  The words of the Scripture spoke more eloquently of the true servant than any words the ministers might have said.  The deep affection in which he was held was manifested throughout the crowded church on every hand as people were unable to restrain the tears.  They loved him so much.

To give our readers another perspective on the funeral, there is this excerpt from a letter that Dr. Allan MacRae wrote to his mother on January 18th of that year :

At Dr. Machen’s funeral the Faculty were asked to act as honorary pallbearers. The service was held in a Church in West Philadelphia. It was a very simple service. The Church was packed beyond its capacity. After the service we all went down to Baltimore for the actual interment. It was a lovely day. this was very fortunate since a January day in Baltimore can be extremely disagreeable for an outdoor service.
I find it hard to realize that Dr. Machen has gone. The first day after the funeral, it was my turn to lead Chapel. Every time I looked at the front row I could see his empty seat, and every time there was a sound at the door it was hard not to believe that he was coming in. Frequently he used to come in during the Chapel Service and stand in the hallway until its conclusion. To go through that service was one of the hardest tasks I ever did in my life. He towered so high above all my other associates that his departure leaves an immeasurable gap.

Words to Live By: It is said that no Christian ever entered heaven a moment too soon. God is sovereign over our lives and over the moment of our death. And as much as one of His dear children might be missed here, as much as their ministry to others might seem irreplaceable, know that God is in control and that He will continue to lead and guide those of us still here, until at last He calls each of us home as well.

Note: Our Through the Scriptures and Through the Standards section have now been replaced by RSS feeds which appear at the top of the column on the right hand side of the page.