The following post was one of the more popular last year, and so we take the liberty of reposting it here today. Some additional bibliographic information has been added at the end. 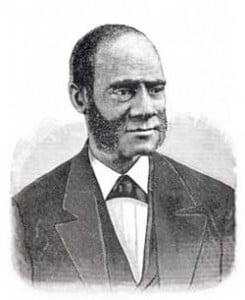 Published works by the Rev. Henry Highland Garnet were few, and include:
1848
The Past and the Present Condition and the Destiny of the Colored Race; a discourse delivered at the fifteenth anniversary of the Female Benevolent Society of Troy, N.Y., Feb. 14, 1848. Troy, NY: J.C. Kneeland, 1848.  29 p.; 23 cm. Reprinted, Miami, FL: Mnemosyne Publications, 1969. Also available on the web, here.