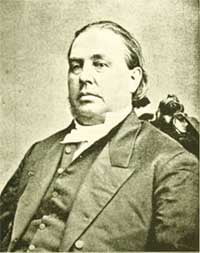 In the winter of 1831, in New Haven, Connecticut, and on the campus of what was then Yale College, there was a remarkable season of revival. Of some eighty students in the Yale class of 1831, sixty came to claim Christ as Savior, including among them, the subject of our post today, Lyman H. Atwater. Lyman and thirty-three of his classmates subsequently became pastors. Following graduation from Yale, he served as a tutor there while pursuing his studies for the ministry.  Two years later, he was installed as the pastor of a Congregational church in Fairfield, CT.

Rev. Atwater had grown up in New Haven, where  Nathaniel Taylor was his pastor.  Taylor, along with two other Congregational theologians, Samuel Hopkins and Timothy Dwight, taught a modified Calvinism which came to be called the New Haven Theology. Because of the Plan of Union, that Congregational influence found its way into the Presbyterian Church, and thus the formation of the New School wing of Presbyterianism.

Those pastors and churches who opposed Nathaniel Taylor’s system constituted the Old School wing of the Presbyterian Church.  The Princeton faculty were notable opponents of the New Haven Theology, and oddly enough, Lyman Atwater also opposed it, despite the fact that he had grown up in Taylor’s church.

A. A. Hodge said of Atwater that he “was unquestionably more intimately and accurately versed in all the varieties and the entire history of what is known as New England theology, than any other member of the Presbyterian Church. He was certainly, together with the late Dr. Charles Hodge, the most able as well as the most voluminous theological reviewer and controversialist of the Old School branch of the Presbyterian Church during the last quarter of a century.”

With that estimation in hand, it was remarkable to then read in another funeral eulogy this recollection from Atwater’s life:

“In May, 1872, he was present at the semi-centennial anniversary of the Divinity School of New Haven as an alumnus, and I have no doubt it was with extreme pleasure, as one of the most delightful acts of his life, that he pronounced a glowing eulogy upon Dr. Taylor as his pastor and theological teacher, followed, as was fitting, with a tribute equally warm to the two eminent friends of his active life, Drs. Charles Hodge and Nathaniel Hewit. Referring to the other teachers of the Seminary, Drs. Goodrich, Fitch, and Gibbs, he gave the following memorable testimony, which will be heard with a new interest by this great assembly who mourn him in his death: ‘Constrained, as I have been in the conflicts of the past generations, to take a different view from these distinguished men of some great issues in metaphysics and divinity, I rejoice, my brethren, that, however we then thought, or may think, we differ, or do differ in our thinking, we can look over these barriers and find a higher, indissoluble ‘unity of faith’ in the one body of which we are members; the one Spirit by which we are sealed; one hope by which we live; one Lord, our Prophet, Priest, and King; one faith by which we live in and through and unto Him; one baptism in the name of the Father, Son, and Holy Ghost, the Trinity in unity, to whom be glory forever.’ “

“He parted from us his fellow-worshippers at the Table of the Lord, with his face glowing with the affections of Christian faith and brotherhood, and reflecting the light of that heavenly temple into whose bright and joyous services he has entered before us. It was a fit closing of his public life among us.”

Words to Live By:
It is a measure of Christian maturity to be able to oppose sin and error while standing in our convictions in a way that is full of an obvious love and concern for the other person. How can we attain that measure? First, by speaking from a strong sense of our own sin, together with a deep recognition of the forgiveness that we have in Christ alone. But beyond that, we have to remember that the battle is the Lord’s. God has charged us with presenting the message of the gospel, but He alone changes the heart. Salvation belongs unto the Lord.

For Further Study:
Addresses delivered at the funeral of Lyman H. Atwater can be read here.