Quite a Name to Live Up To 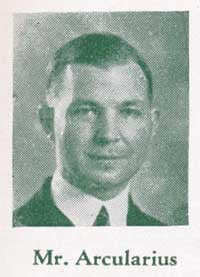 Nearly a year later the couple joyfully welcomed their first child into the family. Philip du Buisson Arcularius was born on May 11, 1902.  Philip’s father was a successful New York City physician with a long family heritage and good social standing and his mother came from a wealthy mercantile family, equal in social standing. Marie’s grandfather was named George Washington du Buisson, so named by his father who was both a friend of General George Washington and the Marquis of Lafayette.  No doubt Philip enjoyed a comfortable childhood, but he knew some of life’s trials as well, as his mother died when he was little more than sixteen. Then just two years later, he graduated from East Orange High School and entered Yale University in 1921, graduating in 1925 with a degree in business.

We don’t know the details of his Christian faith, but at least by the time of his graduation from Yale he had decided to pursue a calling to the ministry. He attended Auburn Seminary for his first year, 1929-30, but decided to transfer from there, due to the socialism espoused by Dr. John C. Bennett and the liberalism of the Auburn faculty. He chose Princeton Theological Seminary, arriving on campus in the fall of 1930, just a year after the reorganization of Princeton and the departure of Machen, Wilson, Allis, and Van Til, who had left over that summer to start Westminster Seminary. Geerhardus Vos was still among the Princeton faculty, but already the school and its curriculum were changing.

Philip graduated from Princeton in 1932 and then stayed for a graduate year. Ordained in October of 1933 by the PCUSA Presbytery of Morris and Orange, Rev. Arcularius soon became the Stated Supply pastor for two churches in Lackawanna Presbytery, in Old Forge and Duryea, Pennsylvania.

In a brief personal testimony delivered in 1974, Rev. Arcularius stated that,

The Lackawanna Presbytery, in northeastern Pennsylvania, then a conservative body, changed rapidly in the next two years. I felt led by the Lord to take my stand on the floor of Presbytery, on a number of controversial issues, on which my conscience would not let me remain silent. I soon found that, as the pastor of the two aid-receiving churches, I was not supposed to speak out so forthrightly, but only to take my money and keep quiet! When I withdrew from the Presbytery, in April, 1936, the Wilkes-Barre Times Leader had a headline, clear across the top of page 2, “Arcularius Quits Presbytery in Free Speech Fight.” My stand, of course, was for the basic, historic doctrines of the Christian faith, as set forth in the Westminster Confession, since superceded in the old Church by “the Confession of 1967.”

In 1953, Rev. Arcularius began a ministry known as Friends of Israel Testimony to Christ, based in Lakewood, New Jersey. He remained with this ministry until his death on February 8, 1985.

Words to Live By: A life of privilege often leads to moral compromise. Raised in wealth, it is difficult to do without it, and corners are cut to maintain the lifestyle. But it doesn’t always turn out that way. Many people of wealth and privilege have recognized the greater worth of the kingdom of God. In some cases they have literally given up everything to follow Jesus. In other cases, they have used their wealth effectively and sacrificially for the sake of the Gospel. God has blessed most of us in this nation with relatively great wealth. Everything that we have is from His hand. How are we using that which He has provided? How are we living up to our God-given name, as followers of Christ?

Image source: Photo of Philip duBuisson Arcularius found as part of an article by Rev. Arcularius, which appeared in The Independent Board Bulletin, 8.4 (April 1942): 3.