A Child of great promise, and a Child of The Promise.

He was the youngest child of Joseph Courten Hornblower, who served for fourteen years as the Chief Justice of New Jersey. Joseph in turn was the youngest child of Josiah Hornblower, a renowned patriot in the Revolutionary War, a member of the first Congress of the United States of America, and the man who brought the first steam engine to this country! 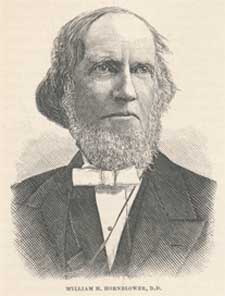 All of which made William H. Hornblower, born on March 21, 1820, a child of promise and expectation.  He graduated at Princeton College in 1838 and began studying law, but within a year or two began to consider the ministry and so entered Princeton Theological Seminary. Graduating from there in 1843, he was soon called to serve as Assistant pastor at the First Presbyterian church of Paterson, New Jersey. When the senior pastor resigned just a few months later, the congregation called Rev. Hornblower to serve as their pastor, and there he served for twenty-seven years.

In those closing years of his life, an honor and a decided change of course came when he was appointed to serve as Professor of Pastoral Theology and Sacred Rhetoric at the Western Theological Seminary, at Allegheny City*, Pennsylvania. In this capacity he served from 1871 until his death on July 16, 1883. One notable student during those years at Western would have been Robert Dick Wilson, whose exceptional abilities in Semitic languages brought him back to teach at Western in 1883, just a few months after Dr. Hornblower died.

[*Allegheny City was a distinct municipality from 1788-1907, located across the river from the city center of Pittsburgh. In 1907 it was annexed and became part of Pittsburgh]

It was said of him in eulogy that “As a preacher, he was instructive and impressive. His life was one of growing usefulness, and he enjoyed the cordial esteem of his brethren, and of the people among whom he lived and labored.”

At the Patterson church, where he had served for so many years, the Session composed their own eulogy on behalf of the church, and stated in conclusion, that,

“In view of the life, labor and character of such a man, the language of the Apostle might not unfittingly have been appropriated as his dying assurance of victory over death: ‘I have fought the good fight, I have finished the course; I have kept the faith; henceforth there is laid up for me a crown of righteousness, which the Lord, the righteous Judge, shall give me at that day; and not to me only, but unto all them that love His appearing.”

Words to Live By:
Do you love His appearing? That is, do you look forward to, and long for Christ’s return? If so, that is a very real assurance of your salvation and your hope of glory. But if you find your love is weak, decide now to spend more time seeking the Lord, in His Word and in prayer. Humble yourself and turn to Him. God will surely bless and answer your prayer to draw near.