March 31: A Sermon from Brother Bryan

It is the Lord’s Day again, and every Lord’s Day should be a day of remembering the death and resurrection of our Lord Jesus Christ. By His death, He paid the debt of our sins. By His resurrection, He gave irrefutable proof that the debt was canceled. 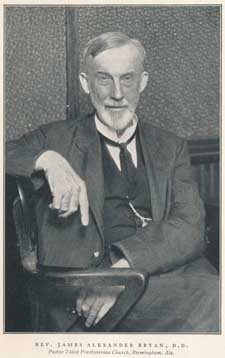 The Rev. James A. Bryan, known affectionately as Brother Bryan of Birmingham, was a powerfully effective pastor and evangelist in the city of Birmingham, Alabama in the early 20th-century. He was particularly effective in his ministry to the poor of the city, both black and white. The following sermon is from one of three published collections of Brother Bryan’s sermons, all apparently quite rare now.

We remember that Jesus, to comfort Mary and Martha, walked 35 miles to their homes in Bethany. With the weeping sisters we read that “Jesus wept.” Oh, my dear friends, when their hearts were sorely grieved over the death of their brother Jesus Himself wept with them. Another very striking thing just here is one of the wonderful sentences which Jesus uttered to them in these words: “Thy brother shall rise again.”

And so, my friends, Jesus speaks to you and to me concerning our sleeping loved ones and it should be very comforting and inspiring to hear Him as He says, “Thy mother, thy father, thy brother, thy sister, thy friend or thy friends shall rise again.” You may be sorely grieved over the loss of a little child or a daughter or a son, but how comforting to hear Jesus say, “Thy child, thy little friend, thy daughter, thy son shall rise again in the last day in the resurrection.”

I wish you to notice the culture and refinement, education, spiritual education of these lovely sisters at Bethany. Martha responded to Christ’s words by looking up into His face and speaking softly and calmly, “Yes, Lord, I know that my brother who is sleeping in his sepulcher down at the foot of this hill will rise again in the resurrection in the last day.” Now Martha was a Jewess and deep down in her heart was that Jewish belief of the resurrection of the dead in the last day as Christ was then teaching in His words: “Thy brother shall rise again.” The spiritually-minded Hebrew or Jew was most secure in such a belief, and this wonderful Jewess of Bethany tells Christ that this was a certainty in her life.

“I am the resurrection and the life.” Death is the absence of life and Jesus says of it, “I put life in that body to bring it back unto myself, and whosoever believeth in Me, though he were dead, yet shall he live again.” I believe this as positively as I can. If I believe in Him, trust in Him, and daily and hourly reach out for Him, when I die my body goes to sleep and is placed in the graveyard or cemetery to be resurrected again at the last day and my soul goes to Christ. The soul of the Christian, the believer goes to Christ and is made perfect in happiness and holiness. Truly that is the reward of walking by faith and not by sight.

Now Jesus is still in Bethany, where the sisters’ faith has been tested and tried in the separation from their brother whom they loved. Many things are taking place since Christ has raised Lazarus from the dead. It was a very exciting time in Jerusalem, Bethany and the surrounding country to which the news had spread very rapidly. The Jews numbered among the enemies of Christ could not stand for Christ’s popularity. Here in Bethany is a man who had been dead four days and Christ has raised him to life. There was the little daughter of Jairus in Capernaum whom Christ had raised very soon after her death by going into the room where her body had been carefully prepared for the casket or bier, upon which it would be soon placed and borne to the cemetery. There with Peter, James and John, Christ prayed and spoke the resurrecting words, “Talitha Cumi.” “Little maid, I say unto thee, arise.”

Again they had heard how Christ upon entering upon the threshold of the approach into the city of Nain had met a funeral procession of a poor widow’s son, her only support and comfort in a world of trials and temptations. No doubt they were very poor people and the dead body was being carried out of corporation limits to be buried in a lonely country cemetery where funeral expenses were little known. Jesus, touched with the grief of that poor mother, walked up to the bier and touched it, saying, “Son, arise,” and the son arose and was restored to his mother again for her comfort and support.

But now the enemies of Christ have, many of them, witnessed the resurrection of a man who had been dead four days, one day longer than Christ Himself would sleep in the garden tomb. Lazarus had come forth from the tomb bound hand and feet in grave clothes. Jesus turned and said to some of them, “Loose him, and let him go.” Friends, we too, have something to do to carry on the work of Christ, who died on Calvary and was resurrected, and says to us, “Go.” We must be active because there is much to be done. Oh, what a blessed thing it is to be at work for Christ by having the light turned on our lives that we may help others to see Christ, the Light of the world. Oh, to help others see that Christ is the bright and morning star, the express image of God Himself, the chiefest among ten thousand, the One altogether lovely, the Immanuel, the Jesus, the light of this dark world, a friend that sticketh closer than a brother, a brother born for adversity, our mediator, our saviour, our comforter.

Of course, there were curious people about the country who were just crazy with excitement over the great event which had just happened at the foot of the hill, below the little village of Bethany. They might have wanted to see Christ, but they were extremely anxious and curious to see Lazarus. Along about this time the Jewish authorities began in great earnestness to devise a way to kill Christ. In the latter part of this chapter they said, “Do you think He will come to the feast?” They were just seeking a chance to entrap and kill Christ. They could not stand the fact that He could open blind eyes, cleanse lepers, heal weak feverish babies in their mothers’ arms, cast devils out of men and women, restore withered hands, eat with publicans and sinners, and heal sick folks on the Sabbath. They could not stand for Him to say that He and the Father were One and that He robbed God of no glory by taking upon Himself the form of God and also at the same time a fleshly body. That is, in that He became flesh and dwelt among us did not rob God of any glory and honor. His enemies were now ready that all doors be closed to Him and that He be put to death.