The beginnings of the Presbyterian Church of America in 1936 were small but richly blessed with men who had taken their stand for the faith of historic Christianity.  [here we are speaking of the denomination that was compelled under lawsuit to change its name in 1938 and which has been known since as the Orthodox Presbyterian Church]. Yet, but a year later—in 1937 and during the Third General Assembly of that church, a group of ministers from among their number were meeting to set up a new Presbyterian church, made up of elders out of that original group of stalwarts of the faith.  What had happened?

They had all agreed on the reasons for the separation from the Presbyterian Church in the United States of America.  That church had allowed departures from the faith at home and on the mission field without doing anything about it.  Failure to discipline those who had broken their ordination vows was rampart.  Indeed, not one minister who had signed the Auburn Affirmation was ever charged by any Presbytery.  J. Gresham Machen himself had acknowledged this failure while he was still living. But he had been taken from the small body of Presbyterian separatists by death on January 1, 1937.

Now in the new church, various secondary issues had sprung up to threaten the peace and unity of the church.  One was the eschatological issue.  Pre-millennialism had always been allowed in the church, but dispensational pre-millennialism had not been accepted.  This was proving to be a divisive issue.  Second, prohibition was raging in the nation at that time.  Many churches, especially in the midwest, were taking a position against the saloon trade.  In that light, an overture was made at the PCA general assembly to bring the church to a position of total abstinence from intoxicating drink.  That was voted down by the Assembly. 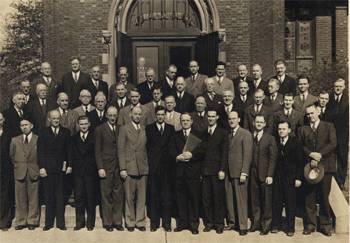 Believing that these two issues were crucial, fourteen teaching elders and three ruling elders met on June 4, 1937 at the St. James Hotel in Philadelphia to discuss their concerns.  Believing that a “false start” had been made by the delegates of the Presbyterian Church of America,  the articles of association were drafted for what later on became the Bible Presbyterian Church.  Their call for a new church which was Calvinistic, fundamental, premillennial, and evangelistic was made at that time.  Their first General Synod did not take place until September in 1938.  At that meeting, a statement was adopted which affirmed that the church and its members would pursue a course of total abstinence from alcoholic beverages, thus condemning the liquor traffic and the modern saloon.  Interestingly though, while they spoke of pre-millennialism as being a hallmark of the new church, they acknowledged liberty in eschatology or the things of the last day.

Pictured above: the delegates to the 1942 Synod of the Bible Presbyterian Church.

Words to Live By:  We can and should be thankful to God for all churches which are obedient to the Scriptures of the Old and New Testaments, which are Reformed in doctrine, those which look forward to the Lord’s return in power and great glory, and which are evangelistic, intent upon taking the Gospel to the nations.  Let us extend a hand of fellowship to all such congregations.

For Further Study:
To view the finding aids for a portion of the Bible Presbyterian Church records preserved at the PCA Historical Center, click here. [information on related collections can be found at that linked page.]