BCO is Presby-speak for Book of Church Order. It is the document that guides the organization, the discipline and the worship of the Church. Every Presbyterian denomination has a similar constitutional document, though they may call it by slightly different names.

The PCA was organized in 1973, but based its BCO on that of the denomination that they were separating from, the Presbyterian Church in the U.S. (aka, the Southern Presbyterian Church). To trace the lineage further, it may be less confusing to simply set out a chronology:

If you’re still with us, here now is an account of the story behind the PCUSA’s attempted revision of their Book of Discipline, in 1857. Though never actually adopted, the committee’s draft is important because that work so reflected the thinking of James Henley Thornwell, and while Thornwell died early in 1862,  he had greatly influenced the men who later picked up the work of drafting a Book of Church Order for the Southern Presbyterians. This 1857 draft of the Book of Discipline was a masterful revision of the old PCUSA Book, and it served as the guiding model for the discipline section of the PCUS Book of Church Order and thus, in turn, the PCA’s Book of Church Order.

So, coming to our story, in The Life and Letters of James Henley Thornwell, by Benjamin M. Palmer (pp. 428), we read the following account :

“The only part of the proceedings of the Assembly of 1857 with which these Memoirs are concerned, was the appointment of a Committee to revise the Book of Discipline, with Dr. Thornwell as its Chairman.  The subject came up before the Assembly through two overtures, one from Dr. R.J. Breckinridge, proposing a change from Presbyterial to Synodical representation, and a limitation of the General Assembly to fifty ministers and fifty ruling elders, each; the other from the Presbytery of Philadelphia, proposing a form of judicial proceedings.

The first suggestion was, to commit these topics to suitable men for consideration, who should report to the next Assembly.  This was enlarged so as to require an examination and revision of the whole Book of Discipline.  The Rev. Dr. Hoge, of Ohio, proposed to add the Form of Government also as a subject for revision, which was resisted by Dr. Thornwell, on the ground that the Church was not yet prepared for this.  This measure was therefore dropped, and the Book of Discipline was put for revision into the hands of a committee, consisting of Rev. Drs. Thornwell, Breckinridge, Hodge, Hoge, McGill, Swift, and Judges Sharswood, Allen and Leavitt.

It may be added, that the subject continued to be under discussion until the breaking out of the war, and the separation of the Southern Church from the Northern.  It was taken up in the Southern Assembly after its organization, under a committee of its own, which reported a revised code for adoption.  The Presbyteries not being sufficiently agreed, the work was laid by; and thus the matter at present rests.  The reader will be interested in the following letter from the lamented Dr. Van Rensselaer, the Moderator by whom the appointment of the original committee was made.  It is addressed to Dr. Thornwell: 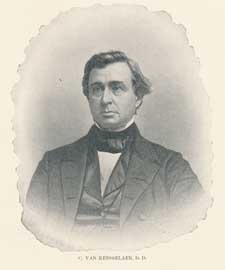 MY DEAR BROTHER:  I feel some solicitude about the results of the action of the committee, appointed by the last Assembly, to revise our Book of Discipline.  I say solicitude, chiefly because I had the responsibility of the appointment of the committee, as Moderator.  On reviewing the whole matter frequently, I have always come to the conclusion that I could not have done better.  I firmly believe that it is in your power to bring in a report satisfactory to the great body of our people.  The reasons why I named you as chairman were, first, your conservative views on the subject of altering our Book; second, your influence in carrying the question in the Assembly; third, the great confidence and love of the Church towards you, and the respect entertained of your mental endowments; fourth, I wished to avoid the appearance of giving too much predominance to this section of the Church; fifth, I was strongly drawn towards you that night, by an influence which seemed to me more like a special Divine influence than anything I remember to have experienced during my whole life.  My mind was led to you, and to none but you.

“Under these circumstances, I have a strong desire to see the work done, and done by you; and I believe that, under God, you can do it.  Alterations in the book are unquestionably called for; and if they are made with judgment and decision, and are not too numerous, the Presbyteries will adopt them.”

Here follow some matters of detail, as to the meeting of the committee.  Then the letter concludes:

“Praying that you may fulfill the best hopes of the Church in the important work committed to your care, I am,
“Yours respectfully and fraternally,
C. VAN RENSSELAER.”

Words to Live By:
Despite how things may seem at times—and they can seem bleak indeed—we must keep coming back to this firm assurance, that God is sovereign over His Church. He is guiding it inexorably toward His intended destination, and He will never fail in His purpose.

Now unto Him that is able to keep you from falling, and to present you faultless before the presence of His glory with exceeding joy, to the only God our Saviour, be glory and majesty, dominion and power, both now and forever. Amen. (Jude, vss. 24-25, KJV)

Postscript:
The 1879 PCUS Book of Church Order was widely commended, and for one, it prompted the PCUSA to return to the work of revision in 1884. As both the Orthodox Presbyterian Church and the Bible Presbyterian Church were formed by people leaving the PCUSA  circa 1936, it is not surprising that the OPC and BPC Books of Church Order are based on prior editions of the PCUSA BCO.  To put it one way, both those denominations follow a northern tradition of church polity, while the PCA follows a southern tradition. There are similarities between the two traditions, but there are also substantial differences.  [The OPC has in recent years made further and extensive changes to their Book of Church Order.] Meanwhile, the RPCNA and ARP Books remain quite different, since they don’t derive from either the PCUSA or PCUS Books.