Today’s post is drawn from Alfred Nevin’s Encyclopedia of the Presbyterian Church (1884), p. 850:

The Long Pastorate of a Great Pastor and Biographer 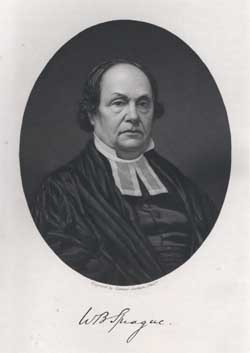 William Buell Sprague was born in Andover, Tolland county, Connecticut, on October 16, 1795. He graduated at Yale College in 1815, and in 1816 entered Princeton Theological Seminary, just four years after the start of that institution. After studying there over two years, Sprague was licensed to preach by the Association of Ministers in the county of Tolland, on August 29th, 1818. As pastor of the Congregational Church of West Springfield, Massachusetts, he labored with great assiduity and success from August 25th, 1819, until July 21st, 1829, when he accepted a call to the Second Presbyterian Church in Albany, New York, over which he was installed on August 26th, 1829.

In Albany, he had a pastorate of forty years’ duration, remarkable for the extraordinary steadfastness and warmth of attachment existing through all that protracted period between himself and his large and intelligent congregation, and even more remarkable for the vast and varied labors performed by him. He has been well and truly described as “an illustrious man, a cultivated, elegant, voluminous, usefull and popular preacher; an indefatigable and successful pastor; an unselfish and devoted friend; loving, genial, pure, noble; an Israelite indeed, in whom there was no guile; one of the most child-like, unsophisticated and charitable of men.”

While Dr. Sprague never relaxed his pulpit and pastoral duties, his added literary labors were prodigious and their fruits exceedingly great. He preached nearly two hundred sermons on special public occasions, the most of which were published. He also produced a large number of biographies and other volumes on practical religious subjects. But the great literary work of his life was his Annals of the American Pulpit, undertaken when he was fifty-seven years old, and finished in ten large octavo volumes.

On December 20th, 1869, Dr. Sprague was released at his own request, from his pastoral charge in Albany, and retired to Flushing, Long Island, where he passed his later years, which were a serene and beautiful evening to his industrious, useful and eminent life. Here he enjoyed the sunshine of the divine favor, and looked upon the approach of death with a strong and placid faith. He gently and peacefully passed away, May 7th, 1876, and his remains were taken to Albany for interment, the funeral services being held in the church of which he had been so long the beloved and honored pastor.

A number of Sprague’s works can be found in digital format, here.

If I may select one for you, The Claims of Past and Future Generations on Civil Leaders, looks interesting, judging by its title.

From Sprague’s Historical Introduction to The Annals of the Presbyterian Pulpit:
“…The early history of the Presbyterian Church in this country is involved in no little obscurity,—owing principally to the fact that those who originally composed it, instead of forming a compact community, were widely scattered throughout the different Colonies. It is evident, however, that several churches were established some time before the close of the seventeenth century. In Maryland there were the Churches of Rehoboth, Snow Hill, Marlborough, Monokin, and Wicomin,—the first mentioned of which is commonly considered the oldest, and was probably formed several years before 1690. The Church on Elizabeth River, in Virginia, is supposed by some to date back to nearly the same period, but the exact time of its origin cannot be ascertained. The Churches in Freehold, and Woodbridge, New Jersey were constituted in 1692 [Note: there is good evidence that Fairfield Presbyterian Church, in Fairton, NJ, was established in 1680.]; and the First Church in Philadelphia, as nearly as can be ascertained, in 1698. In Newcastle, Delaware, in Charleston, South Carolina, and in some other places, Presbyterian Churches were planted at a very early period. In the latter part of 1705, or early in 1706, a Presbytery was formed under the title of the Presbytery of Philadelphia,—all whose members were from Scotland or Ireland, except the Rev. Jedediah Andrews, who was born and educated in New England.”