Don’t understand the jargon in our title? Then read on:—

Two Organizations Provide Ways for the Denominations to Network
[an excerpt from a longer article by Rev. William Johnson]

When the future leaders of the PCA were still planning for their beginning, they often had contact with and encouragement from leaders in the RPCES, the OPC and the RPCNA. These contacts and continuing turmoil in the larger and liberal denominations lead to the founding of successive organizations which served all the conservative Presbyterians as ways to keep networking and building cooperation and unity. The first, the National Presbyterian and Reformed Fellowship (NPRF), was founded in 1971 and counted among its leaders Aiken Taylor of the Presbyterian Journal and Donald Graham, its first executive director. Membership was open to ministers, ruling elders, and other interested laymen. Then in 1975 NAPARC was formed, The North American Presbyterian and Reformed Council. It was a more formal organization than the NPRF in that denominations were members – initially, the RPCES, the OPC, the RPCNA, the PCA, and the CRC (Christian Reformed Church). The former group (NPRF) eventually disbanded in the early 1980’s; the latter group (NAPARC) continues still and has been joined by a few other denominations. [Note: The CRC is no longer a member denomination in NAPARC]

Representatives of the closest conservative Presbyterian Churches – the OPC, the RPCES, the RPCNA, and the PCA – continued formal and informal contacts in the later 1970s. Very few if any substantive differences separated them, although history and personality/style differences remained obstacles and all knew that with negotiated merger plans, “the devil was in the details.” A turning point was reached at Covenant College September 13-14, 1979, when representatives of the four churches’ ecumenical committees met. The PCA, being so young, had actually been urged by some at its General Assembly earlier that year not to consider any merger plan for at least five more years (1984!). When Dr. Edmund Clowney suggested on the first day that a way around this PCA reluctance would be for individual churches or even denominations to simply join the PCA, since it was by far the largest of the four bodies, the idea was seized on by Donald J. MacNair the next day and he made a proposal that the PCA consider extending such invitations in the future.

The PCA’s 8th Assembly, meeting in Savannah, GA, voted on June 17, 1980, 525 to 38, to issue those invitations. The RPCNA soon dropped out of consideration (their adherence to exclusive psalm-singing in public worship was still too much of an obstacle) and the PCA presbyteries voted by the spring of 1981 not to approve the invitation to the OPC [a narrow decision – 75% of the 25 presbyteries were needed to vote yes; only 18 approved; one of those PCA Presbyteries defeated the invitation by only 2 votes – so it could be said those 2 votes had effectively closed the door to the OPC]. The plan that came to be known as J&R [i.e., Joining & Receiving] was successfully used to enable the churches, leaders, and members of the RPCES to join and be received by the PCA during their overlapping annual meetings in June, 1982, in Grand Rapids, Michigan. The final votes were taken with these results: on June 12th, the RPCES Synod approved J&R by a vote of 322 to 90 (78+% voting in favor). Meanwhile, at some point in the spring of 1982, the point was reached where 75% of the PCA presbyteries had approved the invitation to the RPCES, thus effectively approving the reception of the RPCES. All twenty-five PCA Presbyteries voted in favor of receiving the RPCES, though not unanimously in every case. J&R was officially consummated at the opening of the PCA Assembly in Grand Rapids, June 14, 1982.

Words to Live By:
Someone in seminary once commented that if Presbyterians had a soup, it would be “Split Pea.”  That has been the sad commentary for far too long.  Of course, we are not talking about just occasions when, with respect to apostate Presbyterianism, it was better for the sake of the gospel and our children, to let our feet do the voting and leave.  But when Bible-believing Presbyterians cannot join together for reasons far inferior to the truths of the gospel, then there is an occasion to weep. Let us pray for biblical union of all far-flung Presbyterian bodies.  Let us work for biblical union of our “split peas.”   And then let us come with a united biblical witness before an increasing secular society.
Psalm 133:1 “Behold, how good and how pleasant it is for brothers to dwell together in  unity!” (ESV) 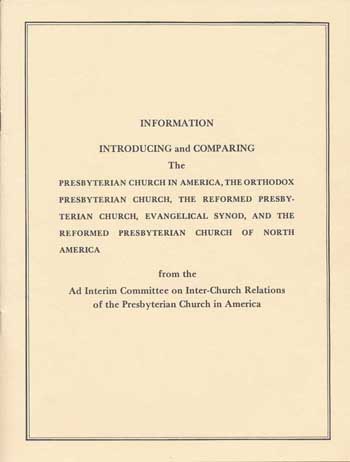 Pictured at left, one of three booklets issued in conjunction with the Joining and Receiving effort.