It was on September 24th, in 1757, that Jonathan Edwards made his decision to accept the offer to become the third president of the College of New Jersey (now known as Princeton University). While the school was decidedly Presbyterian in its affiliation, Edwards was commonly known as a Congregationalist. But two separate accounts exist, contending that Edwards did in fact affirm the Presbyterian form of government.

The first of our articles appeared in an issue of the Philadelphia-based newspaper, The Presbyterian. In this letter, the Rev. Dr. Ashbel Green had originally written to R. J. Breckinridge, editor of the Baltimore Literary and Religious Magazine. Our access to the letter comes from its republication on the pages of The Presbyterian. 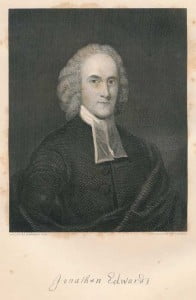 Rev. and Dear Sir:—I have recollected, since I last saw you, that the fact has already been published, which I then mentioned to you in conversation;—and in regard to which you requested me to furnish you with a written statement. In the Christian Advocate, the 10th volume–the volume for the year 1832, and in the No. for March of that year, page 128—after having mentioned a class of Congregationalists, who, in my estimation, were eminent for genuine piety, I added as follows:—”We should have put down here, the name of the great President Edwards; but he was, in sentiment, a decided Presbyterian, and left a manuscript in favor of Presbyterian church government; as his son, the second President Edwards, distinctly admitted to us not long before his death. Beside, the elder Edwards was either a member of the Presbytery of New Brunswick, at the time of his death, or would soon have been so, if his lamented decease, shortly after his becoming President off the College at Princeton, had not prevented.”

The admission referred to in the foregoing extract, was made in consequence of an inquiry put, by me, to Dr. Edwards, as he and I were walking together to the place of meeting of the General Assembly of the Presbyterian church, then in session in this city. I do not recollect the year. I had heard a report, which I think must have come either from my father or from my colleague Dr. Sproat,–both of whom were contemporaries and admirers of the first President Edwards–that he had written a tract, or an essay, in favor of Presbyterian church government; and I was glad to take the opportunity which at this time offered, to ascertain from his son the truth or fallacy of the report. The inquiry resulted in the distinct admission that the report which I had heard was true.

I spoke to Dr. Edwards, of printing the tract or essay, in question; but he did not seem to favor the idea, and I forbore to press it. He said, that the manuscript referred to, was among several other unpublished papers of his father, which, as I understood him, were then in his hands. Into whose hands they have passed, since the death of Dr. Edwards, is unknown to me.

Respectfully and affectionately, Yours,

*     *     *     *
The second item appeared on the pages of The Christian Observer, in 1850. It relates a letter that President Edwards wrote to Dr. Ebenezer Erskine, of Scotland and provides a quotation from that letter, thus:
PRES. EDWARDS, A PRESBYTERIAN.

In a letter to the Rev. Dr. Erskine of Scotland, President Edwards , (whom Robert Hall calls, “the greatest of the sons of men,”) gives the following statement of his views in respect to Presbyterianism :—

“You are pleased, dear sir, very kindly to ask me, whether I could sign the Westminster Confession of Faith, and submit to the Presbyterian Form of Government. As to my subscribing to the substance of the Westminster Confession, there would be no difficulty; and as to Presbyterian Government, I have long been perfectly out of conceit of our unsettled, independent, confused way of Church government in this land, and the Presbyterian way has ever appeared to me most agreeable to the word of God, and the reason and nature of things.”

Such were the views of many pastors in New England, twenty-five years ago—and such we presume, are the views of many at this time, notwithstanding the efforts of Dr. Bacon, the Independent and others, to create and waken up prejudice against Presbyterianism.—It is very natural for an agitator, a man of progress, or of loose views in theology, to prefer some type of Independency. Without a Session to advise with him in the spiritual oversight of the Congregation, he can (if a manager) have his own way in controlling everything in his church. If a careful and discreet ruler, he may acquire more power in his charge as an Independent, than he could hope to gain as a Presbyterian minister.—Amenable to no permanent judicatory for the doctrines which he teaches, he can follow the impulses of his own nature, and teach all the contradictions and transcendentalism found in Dr. Bushnell’s book without losing his place or influence in his church and association.

But if it be desirable that the members of the Church should be duly represented in the administration of its spiritual government,—if the pastor should have responsible counselors, well acquainted with the Church, and all its interests and peculiarities, to aid him in this work, the Presbyterian form of government is to be preferred. It is equally important as a shield to the minister in many cases of discipline, as well as to render him duly responsible for his personal and official conduct, teaching, and character.

In the history of the Christian Church, there have been basically only three forms of church government found, though with some variations within each form.
The Episcopal form of church government is hierarchical, and typically has one or more archbishops overseeing bishops, who in turn oversee rectors, who are placed over congregations. Some of the Episcopal variations include the Roman Catholic Church, the Eastern Orthodox Church, the Anglican Church and the Methodist Church
With the Congregational form of government, each congregation is autonomous. Though congregational churches often form associations, the local church always retains its autonomy. Variations on this type include Baptist, Congregational, Evangelical Free, and Mennonite.
And finally, the Presbyterian form of church government, which is distinguished by a series of courts, rising from the local level to the national level: Session – Presbytery – Synod – General Assembly. At each of these levels, both teaching elders (ministers) and ruling elders (non-ordained laity) sit as equal members.
Session: The pastor(s) and ruling elders of a congregation comprise the Session and govern an individual congregation.
Presbytery: Pastors and a representative number of ruling elders from each of the Presbyterian churches in a specified region comprise the Presbytery, and conduct the business of the Church on a regional level.
Synod: This court is comprised of several Presbyteries, and thus covers a larger region. Smaller Presbyterian denominations do not typically have the Synod structure, or may only meet nationally as a Synod, in which case they do not use the General Assembly structure.
General Assembly: The highest court of a Presbyterian denomination, this body meets as a national or trans-national court, with its members again consisting of elders, both ruling and teaching, sitting as representatives of the churches in the denomination.