A New Method of Missionary Work 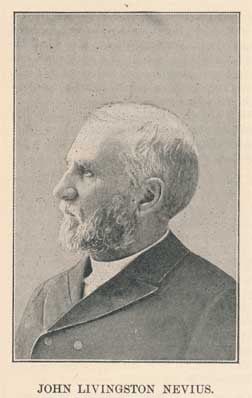 For centuries, the work of foreign missions all over the world had been done by faithful missionaries going from nations like England or America, serving the Lord in some field white unto harvest, and then going off the scene back to their sending agency. That method was in need of changing, and the Rev. John Livingston Nevius would be the one who would change foreign mission methods forever.

Born on March 4, 1829 in western New York, John Nevius attended Princeton Theological Seminary in the 1850′s. Called while in seminary to the foreign mission field, he found the perfect mate in Helen Coan in 1853. Marrying her, they set sail for China.

At first they traveled, setting up missions and schools. Then they settled down in one province of that vast land.  Observing the work of other missionaries in that nation, this Presbyterian missionary began to see the need to establish “self-propagating, self-supporting, and self-governing indigenous churches from the very beginning of a missionary’s work on the field.  Interesting, even though this approach, which was eventually crystallized in a book, was first developed in China, it never really matured into reality there. But when broaching the same method in the land of Korea, it was received completed by the Korean church. And today, that land and its churches have taken the three “self’s” and followed them religiously.

John Nevius also in his plan suggested that Christian missionaries should only begin programs which the national church desired and supported.  Further, the national church should call out and support their pastors. Intensive beliefs and doctrinal instruction should be provided each year by the missionaries. It is clear that the focus would not be on some Western culture and church, but rather on the mission field’s culture and church. Indeed, the missionary’s “job” was to work themselves out of that “job,” and leave it to the Christian church people to win their nation to Christ.

Countless church bodies have followed the Nevius plan. The Mission to the World agency of the Presbyterian Church in America employs this plan, often setting deadlines for establishing a Presbytery of pastors and churches, and then sending the missionary to some other field to continue the process.

John Livingstone Nevius died while in China on October 19, 1893 and is buried in China.

It is deeply interesting to ponder the Lord’s sovereign hand in the affairs of China, from that time until now, how the Lord has purified that Church. To read another missionary’s account, from 1927, click here.

Words to live by:  When I hear of a church which has closed down when a pastor has left by moving on or by death, I reflect that the  Nevius plan wouldn’t be a bad one for our local American church scene.  For reasons known only to the pastor and people, the work to equip the saints to do the work of service, as Ephesians 4:11, 12 states, had been missing in that closed church. Now it was the pastor’s fault. He wanted to think that he was irreplaceable. Or maybe the members resisted that Scriptural methodology. But whatever the reason was, the work came to an end when the pastor was removed from the scene. So here is my question? Pastors, are you equipping the saints to do the work of ministry? And members, are you zealous to be equipped to do the work of ministry? It is important to ask and answer these questions.