October 29: Bill of Complaint Against the PCofA

The Presbyterian was a long-standing periodical issued out of Philadelphia. The last solidly conservative editor of that journal was the Rev. Samuel G. Craig. When Craig was eased out of his post, he went on to establish the Presbyterian & Reformed Publishing Company.

So the PCUSA brought suit against the fledgling denomination that had formed in June of 1936. Before they had even met for their second General Assembly, the lawsuit was filed, and before another two years had passed, they concluded that they simply did not have the funds or the inclination to pursue the matter further through the courts. Thus the young denomination yielded and chose a new name, which they bear to this day: The Orthodox Presbyterian Church.

So much for background (it takes patience to be a Presbyterian!). Now on to our story. As the lawsuit had been filed by the PCUSA, discussion ensued in the papers, as you would expect. One of the more interesting letters appeared in the October 29, 1936 issue of The Presbyterian. In this letter, a Mr. Robert C. McAdie told why he opposed the lawsuit brought by his own denomination. His letter is, if nothing else, entertaining, for Mr. McAdie certainly had a gift of expression. But it also provides, in the reading of it, a good, though brief, look at the issues at stake:—

RE: BILL OF COMPLAINT

In your issue of September 3, your readers are presented with the full outline of a “Text of Bill of Complaint Against the Presbyterian Church of America”! Sponsored by a committee of our leading ministers and elders, who claim to represent “all other officers and members of the said Presbyterian Church in the United States of America,” it seemed to me, as one of that great family, a wise precaution to give this somewhat portentiously worded “Complaint” a sufficiently careful study to either endorse or disavow a proceeding for which “all officers and members” are made responsible.

As a sort of “multum in parvo” outline of the forces and activities of the three Churches, Presbyterian, U.S.A., the United Presbyterian, and this latest intruder, the “Presbyterian Church of America,” it supplies much useful information in compact form, and for this I am properly grateful. But as a complaint on the part of our great denomination against the comparatively tiny organization, which somewhat egotistically demands the right to march under the obviously top-heavy title, “Presbyterian Church of America,” the assertions and charges embodied in the document give me an impression of either “Much Ado About Nothing,” of elephantine jitters caused by the presence of a mouse, or, even less complimentary spiritually, of an ecclesiastical vindictiveness which, having done its own best, or worst, now seeks an ally in secular law!

Thus our complainants emphasize at one point that, like the conies, this Machen following “are but a feeble folk,” since I read: “The organization and membership of the defendant Church at the present time is largely limited to a few individuals and churches located in Philadelphia County and adjacent areas” (since that writing, Southern California has hatched a Machen presbytery!) yet, if allowed to wear the magic panoply of the new name, “Presbyterian Church of America,” what dynamically expansive or conquering qualities these same complainants attribute to the few! “The similarity of the name of the defendant Church to that of the plaintiff Church will cause, and is intended to cause, irreparable injury and loss to the plaintiff Church”! What a welcome revelation of their own powers these words ought to convey to the ousted rebels!

But, one may ask, is this similarity of names, thus denounced and evidently feared, really any more than that of our Southern and Northern Churches, the U.S. and U.S.A.? These mean practically the same thing, yet in my sojourn down South I cannot recall seeing or hearing of Presbyterians who could not distinguish which from t’ other! But apparently if these Machenites disguise themselves in the ample folds of their chosen name, the present membership of the U.S.A. branch–and why not that of the U.S. branch also?–are fated, if we accept the dolorous outlook of the complainants, to develop an immediate mental collapse, and so become easy victims of Machen’s kidnappers! Not much of a compliment to the usual discriminating ability of Presbyterians!

One also notes how the complaint asserts that “they (Machen et al.) renounced their membership in the plaintiff Church”! That they also employed every means of retaining that membership, renouncing it only expulsion therefrom, is not even mentioned! Or would not the secular court be interested in the militant preliminaries to this establishment of a new Presbyterian organization?

On these grounds I object to any partnership in the complaint, but most of all because, as pointed out by Dr. Barnhouse, such an appeal to Caesar makes light of Paul’s solemn warning against airing Christian quarrels in secular courts. And if successful would it lessen by one iota the zeal of these battling opponents? Quite the contrary. Under some other name they would but redouble their attacks on their mother Church, which not only cast them out of her fold, but also sicked on to them the legal dogs of war. Prosecuted out of their Church, persecuted through secular aid beyond its ecclesiastical bounds; what a powerful incentive to fight!

Our copy of the above letter, as it appeared in The Presbyterian, is found in Scrapbook no. 5, in the Henry G. Welbon Manuscript Collection (see scanned image below). Mr. McAdie’s letter was also reproduced on the pages of The Presbyterian Guardian, in the November 14, 1936 issue. 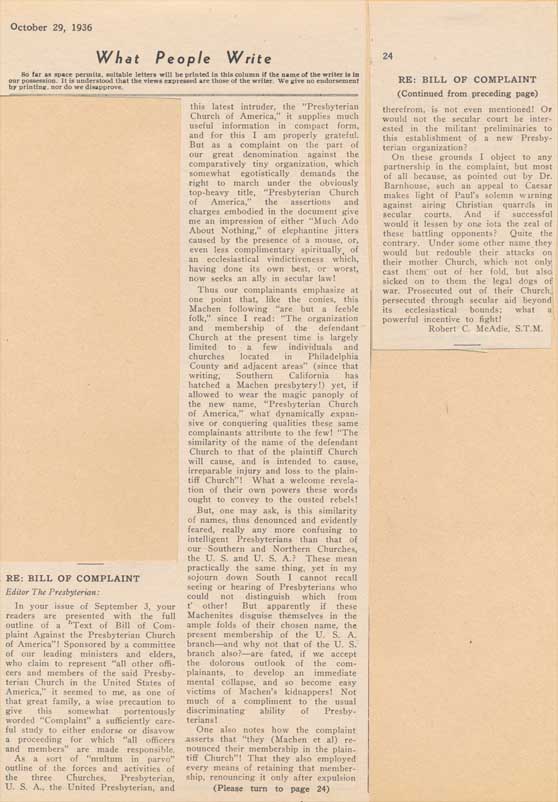