Did you know, that in a manner of speaking, the official archives of the Presbyterian Church in America—the PCA Historical Center—began with a devastating fire?!

Let me explain. The PCA Historical Center began its existence in January of 1985. At that time the PCA did not have central offices for its agencies, so the president of Covenant Theological Seminary, Dr. Will Barker, offered to host the newly founded archives. The PCA had just a few years before received another denomination—the Reformed Presbyterian Church, Evangelical Synod (RPCES)—and with that merger, Covenant College and Covenant Seminary both became PCA schools. It made sense to put the Historical Center at the Seminary, too, because the RPCES archives were already there. 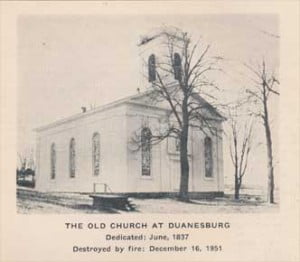 I’m getting to that (It takes patience to be a Presbyterian!): The General Synod, or “New Light” RP’s were a denomination that began shrinking in numbers during the last part of the 19th-century and the first part of the 20th. At their low point, there were only nine General Synod churches. Then, around the 1940’s and 1950’s, with the addition of some new pastors, they began to plant new churches. By the time of that 1965 merger, there were twenty-eight RP, General Synod churches. One of their oldest churches was located in Duanesburg, New York. It had been founded in 1795 [and still exists today, as a member congregation of the PCA]. The pastor of the Duanesburg church was one of the older RP pastors. It was he who almost single-handedly held the little denomination together in the first half of the 20th-century, serving as Stated Clerk and editor of a small denominational magazine, The Reformed Presbyterian Advocate.

Rev. Chesnut finally retired as pastor in 1942, but he could already see the Lord’s blessing and that the little denomination was actually starting to grow again. That meant it was important that future generations should know their history; they needed to know where they came from as a denomination; they needed to be reminded of the convictions, hopes and prayers of their founding fathers. If these things were preserved, then they would have a guiding standard for the future. And so Rev. Chesnut devoted much of his retirement years to building an archives for the General Synod group. He put out a call to other members of the denomination, soliciting donations of various materials. Notices like this began to appear in their various publications:

We have added some more valuable material to our collection of books and other literature, and added more case room and are now ready to receive antiques or valuable historical matter for the benefit of the coming generation. Have you anything to spare that would soon be lost, or valuable to the church for future reference? It will be in safe keeping for years to come. What we want, may be of no value to you, but very valuable to others in later years.

Slowly the collection began to develop. As added materials arrived, they were carefully stored away at the Duanesburg church by Rev. Chesnut. Then it was all lost in one night, when fire destroyed the church building. Rev. Harry Meiners, pastor of the church at the time of the fire, gave this account:

It was early evening, December 16, 1951. We were just getting our Sabbath evening supper on the table when Miss Bertha Wilber and Miss Charlotte Knowles burst into our front door with the exclamation: “Did you hear the fire siren? Our church is afire!” I believe I made the fastest trip from home to church that I had ever made.
When I arrived the fire was just breaking through the west windows and the firemen were fighting the flames. My first thought was to save something, especially having in mind the Historical Repository. As I opened the front door and tried to go in, the smoke drove me back and made it impossible to go in to get anything. Two other men had previously tried to get in, but were prevented by smoke.
A few minutes later the fire company ran out of water. In the country the trucks carry a tank of water and whenever possible pump water from a well or fire-pond. Neither was available near the church, so after the water supply in the tanks was exhausted there was nothing more that could be done. Firemen, church members, neighbors could only stand helplessly watching it burn. Our church, built in 1837, which we loved so well and had started to redecorate, was burned to the ground. There was nothing left standing but the chimney we had erected a short time ago.
As I left the scene to break the news to Dr. Chesnut, I went with a heavy heart. I was afraid the news would be a very great blow for him. But I was wrong—he encouraged me and immediately began talking about building a new church. His words: “Don’t be discouraged, Mr. Meiners, and tell the people not to be discouraged. With God’s help we can do anything,” are still ringing in my ears.

Words to Live By:
On December 23, following the fire, Rev. Meiners preached before his congregation from the text of Philippians 1:12—”But I would ye should understand, brethren, that the things which happened unto me have fallen out rather unto the furtherance of the Gospel.” And so he concluded, “This is our prayer, that our calamity will be a means in God’s hands to further the Gospel of our Saviour, Jesus Christ.”

As Christians, we must pray in this way, even though we perhaps only rarely know why the Lord allowed somethings to happen they way they did. As to archival collections, we work to preserve these things for so long as the Lord will allow. They are not forever, but for so long as we have them, they stand as a testimony to how the Lord has been at work among this small portion of His Church. In all things, may God be glorified!