December 8: At the Crossroads

As noted previously, the Rev. Donald Patterson brought the central sermon of the week of that first General Assembly for the PCA. His sermon was titled, At the Crossroads. As with the Message to All Churches, this sermon serves to set the standard for the young denomination, a standard which we would do well to regularly review. As Dr. Patterson states, “the primary purpose of Jesus Christ in the world must never become a secondary cause in His church.” 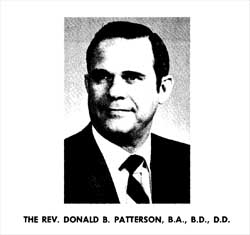 No other figure of speech describes more adequately our situation tonight than does the one that states that we are “at the crossroads.” Having come to this place because of a deep conviction we have been laughed at, criticized, maligned, made fun of and even harassed, yet we have come. Some of us face uncertain days, while others breathe more easily for their “lives have fallen in pleasant places.”

None of us would deny that we are living in a new day with all kinds of exciting opportunities for Christian witness at home and overseas. The future is as bright as the promises of God. I am impressed by the fact that those giving thought to the formation of a new denomination are facing up to the principle that the primary purpose of Jesus Christ in the world must never become a secondary cause in His church.

As the apostle Paul set out on his third missionary journey he carried with him the half-Jewish, half-Asian-Greek Timothy and the Gentile Titus. He was joined by others as they visited churches established earlier. In the spring of 54 A.D. they came to the strategic city of Ephesus. The story of the evangelization of that city is one of the outstanding missionary accomplishments of history. We do not have all the records, but two years later it was said ” … all they which dwelt in Asia heard the word of the Lord Jesus, both Jews and Greeks.” (Acts 19:10)

Since the beginning of the Christian Church, it has been at its best when it is militantly evangelistic. Refined by violent opposition, a fierce dedication to take the Gospel to every man at any cost characterized our predecessors.

Unfortunately, the Church has not been able to maintain its most dedicated missionary enthusiasm for very long, and having failed to polarize public opinion about Jesus Christ it has retreated from the arena of open evangelism. The Church has hidden behind symbols of strength and power — protected by its theological positions — while whole generations of unimpressed, uncommitted and unevangelized people go by outside.

I may have misunderstood the Scripture, but my impression of the Church was that it was never meant to be some kind of a fortress out of reach of the people. The Church was to be an outgoing, proclaiming, evangelistic body of believers dedicated to the passion for the the world-wide evangelization of people.

As I understand the command of Jesus, we are to preach the Gospel to every person, but no generation of Christians has ever come close to fulfilling the Great Commission in its own times. The likelihood of our evangelizing the world seems so remote that few of us even think about it — much less pray about it.

In 1966 I attended the World Congress on Evangelism in Berlin where a population clock clicked off the increase in the world’s population while we sat in that meeting. Nothing made a more profound impression on me that week.

There was a day when preachers were called the “prophets of doom,” but the title now goes to the scientists. The scientist with his charts and carefully researched prognostications is in the limelight. It has become obvious that if the Church is ever to evangelize the world it must greatly increase its level of missionary activity, or it will be too late to fulfill the Great Commission.

Facing the command of our Saviour and with some knowledge of the work of various mission organizations down through the years, it is my opinion that our fledgling denomination must search for a workable plan for world-wide evangelization. We must go back to the New Testament and base our global ministry on apostolic patterns and standards. Listen to what Paul wrote to Timothy: “I obtained mercy, that in me first Jesus Christ might show forth all longsuffering, for a pattern to them which should hereafter believe on him to life everlasting.” (I Timothy 1:16)

In that first century Paul provided a working model that we would do well to follow — “all they which dwelt in Asia heard the word of the Lord Jesus, both Jews and Greeks.” (Acts 19:10). He reached the whole province — all the people! He effectively fulfilled the Great Commission for that time and place by carrying the Gospel to all the inhabitants of what is now Turkey.

You know the history of the church in that area. Luke wrote: “So mightily grew the word of God and prevailed.” (Acts 19:20) Whatever Paul did at Ephesus needs to be repeated again throughout the whole 20th century world.

God’s command to Adam was “Be fruitful, and multiply, and replenish the earth, and subdue it and have dominion.” (Gen. 1:28). Man has done that. He is now walking on the moon, living at the bottom of the ocean, doubling his store of knowledge every few years and now he says that he is close to reproducing living matter in the laboratory. He has so thoroughly carried out his original assignment that he has now produced a terrifying ecological imbalance that threatens to destroy him.

With the coming of Jesus Christ a new commandment was given. He discussed it often with His disciples. Listen to it again:

Matthew 28:18-20 “All power is given unto me in heaven and in earth. Go ye therefore, and teach all nations, baptizing them in the name of the Father, and of the Son, and of the Holy Ghost, teaching them to observe all things whatsoever I have commanded you.”

Mark 26:15 “Go ye into all the world, and preach the Gospel to every creature.”

Luke 24:46-48 “Thus it is written, and thus it behoved Christ to suffer, and to rise from the dead the third day: And that repentance and remission of sins should be preached in his name among all nations, beginning at Jerusalem. And ye are witnesses of these things.”

Acts 1:7,8 “It is not for you to know the times or the seasons, which the Father hath put in His own power. But ye shall receive power, after that the Holy Ghost is come upon you; and ye shall be witnesses unto me both in Jerusalem, and in all Judea, and in Samaria and unto the uttermost part of the earth.”

Matthew 24:24 “And this Gospel of the kingdom shall be preached in all the world for a witness unto all nations; and then shall the end come.”

Obviously, the task of world evangelization is to continue until the end of the world. The obligation is still binding. The Great Commission has not expired and is applicable today.

We have taken a strong stand on some of the complicated facets of Christian theology, but in the Great Commission there is a wonderful simplicity. Jesus is calling for uniformity of action and singleness of purpose: Christians are to go into all the world and preach the Gospel to every living person. It is a call to action — a command to total evangelization — a commitment to proclaim the Gospel to every person.

The message of that first century Church was uncomplicated. Jesus Christ, the Son of God, was crucified and buried, but on the third day He rose from the dead. Forty days later He ascended to the Father and He promised to return. The early declaration of faith did not reply to all the questions that men were asking, but it did give an understandable series of concepts for the evangelization of the people.

We must believe that we are justified in changing the religious beliefs and the moral behavior of the people. We must believe that Jesus Christ is the only way to God and that all other religions, beautiful and presently helpful as they may appear, are inadequate. Man is separated from God by his sins and he will invent substitutes. Without a living knowledge of God man has degenerated and developed his heathen religions and cultures. Underneath the surface there is still a hunger that is not satisfied apart from Christ.

The primary motivation for world evangelization is a love for our fellow men and a firm belief that all who do not accept the Gospel of Jesus Christ are hopelessly lost and condemned to eternal separation from God. If Jesus Christ is right, then all the world must be evangelized and we must make converts among all other religions.

The magnitude of the Great Commission is a frightening challenge to our embryonic denomination, especially in view of the lack of missionary vision in our time. We cannot answer for the ages that are past, but we are responsible for every man, woman and child in every community in every cultural group in our generation. It is for today that we must answer to God.

What we need today is a fresh look at what the Scriptures have to say about the sovereignty of God. He knows the end from the beginning and is working all things after the counsel of His own will. He is able to make the wrath of man praise Him. No man can stay His hand or say to Him: “What doest thou?”

Anybody can believe in the sovereignty of God when the situation is under control, but when things get out of hand, when right is on the scaffold and wrong is on the throne, it is then that the purposes of God are being worked out according to His plan.

The success of world missions is not to be measured against past accomplishments or present gains, but by the realistic progress toward the fulfillment of the Great Commission and the response of the Church to pursue its task with faith and vision.

What will you do about it? As you stand at the crossroads, what will your decision be? I promise you difficulties and dangers. Messengers of the cross have been hunted and hounded, whipped and flogged. Some have given their lives. But the mandate has not been rescinded.

Jesus Christ is the Head of the Church and the Lord of history. Leaders come and go — nations rise and fall — civilizations wax and wane, but the worldwide mission of the Church will continue to the end of the age.