February 11: In Appreciation of a Christian Scholar 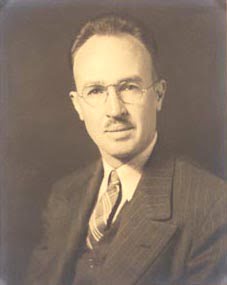 It is an enduring memory these many decades later for the author of this post. Looking from my living room window during my teenage years, I could see on many a Sabbath day afternoon, Mrs. Grace MacRae reading from a book, under a tree on the Faith Seminary campus in Elkins Park, Pennsylvania, to her husband Allan MacRae, and their only child and son, John. It was a  habit which I started in my family when I was married and later had a daughter to whom we could read Christian books.

Today, February 11, is the birthday of Allan A. MacRae. Born in 1902 in Calumet, Michigan to John and Eunice MacRae, Alan showed an inclination from his earliest age for scholarly pursuits. Who among our readers studied Latin in grammar school, often reading that ancient language in a six-language Bible edition? Their home was often the hub for literary clubs, political groups, and church fellowship times. Allan would receive Christ as Savior and Lord at an early age. In those same young years, he read the Bible through, often reading twenty to thirty chapters a day.

Due to the poor health of his physician father, Allan moved with his parents when he was ten years of age, to Rome, Italy. Continuing his education each morning, he found the time in the afternoons to visit all of the sites in that ancient city. Those of us readers who were in his theological classes can remember illustrations from that time in his life. Returning to the United States, he moved to Los Angeles where he finished high school. Entering Occidental College at the age of sixteen, he excelled in college life, earning his Bachelor of Arts degree and one year later, a Master of Arts Degree.

Studying under R.A. Torrey for a year at the Bible Institute of Los Angeles, the latter encouraged him to attend Princeton Theological Seminary. Under the teaching of theological greats like Geerhardus Vos, Robert Dick Wilson, Caspar Wistar Hodge, John Gresham Machen, and Oswald Allis, he graduated from this school of prophets.  Returning to his home, he was licensed and ordained by a presbytery who asked  him simplistic questions in his exam, like “who wrote the four gospels?” Thankfully, ordination candidates today among the conservative Presbyterian denominations face a more appropriate line of questions.

With an award in hand from Princeton Seminary to study Semitics at the University of Berlin in 1927, Allan proceeded to study Babylonian Cuneiform, Egyptian Hieroglyphics, Arabic, and Syriac.  A four-month trip to Palestine afforded him the invaluable experience of an archaeological dig at the biblical city of Ham, under the tutelage of William F. Albright. But his studies oversees were interrupted by a call from Robert Dick Wilson to return to the States to take on the teaching of the Old Testament at a newly formed seminary called Westminster Theological Seminary in Philadelphia, Pennsylvania.  He was one of the founding faculty of that new institution. Eventually, he would received his Ph.D from the  University of Pennsylvania in 1936.

The rest of Dr. MacRae’s long ministry in the Lord’s kingdom began during the era of themodernist controversy in the 1930’s, during which time he threw his lot in with the newly formed Presbyterian Church of America, and later became a founding member of the Bible Presbyterian Church. Leaving Westminster Seminary in 1937, he became the first president of Faith Theological Seminary in 1938, and later was founding president of Biblical Theological Seminary, in 1971.  His students over these many years included men like Francis Schaeffer, Joseph Bayly, Vernon Grounds, Kenneth Kantzer, G. Douglas Young, Samuel Schultz, Jack Murray, John Battle, Charles Butler, and not a few readers of these web posts.  The latter can no doubt add their own remembrances of this man of God in the comment lines.

The late professor of Systematic Theology Robert Dunzweiler, from which most of this post was gleaned from an address which he gave, highlighted Dr. MacRae’s faithfulness as rooted and grounded in the inerrant authority of the Scriptures, coupled with his stress upon vital Christian living. He departed this life in 1995 and now worships before the throne of grace. His only son, John, as a teaching elder in the Presbyterian Church in America, is now a missionary in Australia after years of pastoral ministry in Pennsylvania.

Words to Live By: To be known and recognized as being faithful to the Scriptures, while also being diligent in practical Christian living, is a worthwhile goal in our Christian lives.  The Christian life is ever built upon Christian doctrine. O Lord Jesus, give Your Church Christian men and women and children who follow in the steps of those who have gone before  us.