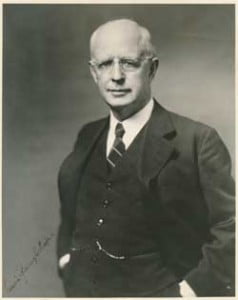 Yep. Lewis Sperry Chafer, the founder of Dallas Theological Seminary, was a Presbyterian. As was Chafer’s mentor, C. I. (Cyrus Ingerson) Scofield, and as was Scofield’s mentor, James H. Brookes. Presbyterians all. Perhaps that helps to explain how it was the dispensationalism made such inroads into Presbyterian circles in the era from the 1880′s to the 1930′s. That, and the fact that dispensationalists did a fair job of defending the Scriptures when few others. apart from the Princeton conservatives, would or could.

Lewis Sperry Chafer was born in Ashtabula county, Ohio, on February 27, 1871. His parents were the Rev. Thomas Franklin Chafer, a Congregationalist pastor, and Lois Lomira Sperry Chafer, the daughter of a Welsh Wesleyan lay preacher. When Lewis was just eleven, his father died of tuberculosis. Lewis developed an interest in music while attending the New Lyme Institute as he prepared for college. At Oberlin College, he majored in music and met his future wife, Ella Loraine Case. After their marriage in 1896, he began to serve as an evangelist.

An invitation to teach at the Northfield Boys School in turn led to a close friendship with C. I. Scofield, and as they say, the rest is history. Dallas Theological Seminary, founded in 1924 as the Evangelical Theological College, continues to this day. Its founder, Lewis Sperry Chafer, died on August 22, 1952.

In a prior post we talked about Milo Jamison’s role in the split that created the Bible Presbyterian Church. Jamison was a dispensationalist, while the recently formed denomination that was renamed the Orthodox Presbyterian Church was quickly aligning itself against that system. In the last several decades, dispensationalism as a system has been going through a number of changes, but historically it has been anchored to three key tenets: (1) A “normal, literal” interpretation of Scripture; (2) A strict distinction between Israel and the Church; and (3) a scheme of dispensations or ages which divide up Biblical history. The latter two points are particularly where we find ourselves in disagreement with dispensationalism.

D. James Kennedy, when examining men for ordination, would routinely ask for the candidate’s views on dispensationalism, and whether the candidate approved or disapproved of the 1944 Southern Presbyterian report on dispensationalism. And Dr. Kennedy was right to use that Report in that way. However, the untold story behind that PCUS report is that in all likelihood, the Report was an attempt to split the conservatives in the Southern Presbyterian denomination, many of whom at that time were dispensationalists. As modernists were gaining power in the PCUS, the 1944 Report gave them an opportunity to set one camp of conservatives over against another and so dampen opposition to their own agenda.

In Sum:
Few conservative Presbyterians today consider themselves dispensationalists. The old Reformation doctrine—really the old Biblical doctrine—of covenant theology is being taught once again, and taught well in our seminaries and in our churches. How it came to be virtually ignored in the 19th-century is something of a mystery, but the general lack of such teaching in that era does help to explain the rise of dispensationalism during the same time period. Nature abhors a vacuum.

For Further Study:
One of the better popular-level works on covenant theology is O. Palmer Robertson’s Christ of the Covenants. Ask your pastor about other helpful materials on this important subject.