March 16: Rev. Daniel Iverson on the Message to Laodicea 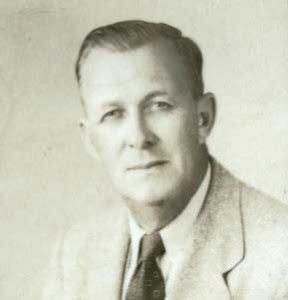 This past Thursday, we presented a short post on the history of the Shenandoah Presbyterian Church, Miami, Florida, founded by organizing pastor Daniel Iverson, Sr.  Today, for our Lord’s Day sermon, we present Rev. Iverson’s teaching on the Book of Revelation, chapter 3, verses 14-22—The Message to Laodicea. This message was part of a larger series on the Book of Revelation, delivered before the Shenandoah congregation in the late winter and Spring of 1951.

Today we come to the last of the seven messages which make up the second division of this book – “The things which are” – the description, we believe, of the course of the entire church age.

We have said before that something of the spirit of all will be in each, but it is particularly true that the characteristics of the last three will be found running concurrently to the end» So we shall find the cold formalism of Sardis hand in hand with the warm loving devotion of Philadelphia 5 but increasingly also the state shown by the description of Laodicea, which depicts the state to which the loss of the first love of Ephesus has brought the chur­ch of the Lord Jesus Christ.

Laodicea is called by our Lord, the “luke warm” church – it shows a state of falling away as warned of by the Apostles. They tell us that these conditions will be the mark of the last days. Especially does the Apostle Paul link it with the coming of Christ in 2 Thess. 2. “Falling away”; “lovers of pleasure rather than lovers of God”; “having a form of godliness but denying the power”; a general carelessness and indifference. Hardly a page of the epistles goes by without the warning underscoring of the Holy Spirit.

With our passage today we see how our Lord sums the whole thing up. The name Laodicea means “Peoples Rights” or “Rule of the People”; it has become very familiar to us in these days. Peoples rights and rule, the most refined form is democracy, its ugliest mob rule, but both spring from one idea, each man thinking his way is the best way and insisting on his rights. That was the spirit in the time of the judges in Old Testament days when God said twice over, “Each man did that which was right in his own eyes” and then, between the two references records instances of the utter anarchy and confusion it brought about in the political, home and religious life of the nation. Think of a Family where every member insists on his own way; carry that out to world dimensions and what do we have – the world of today.

The basic principle of the church of Jesus Christ is that she submits herself to the rule of her glorious Head and follows the leading of the Holy Spirit. Alas, we all know how much of the spirit of “peoples rights” has invaded the church and quenched the working of the Spirit. Just ask ourselves and answer honestly,

“Is the church run to please God or the people in it?” We are not concerned now with the world, except to say the church should in­fluence it, instead of which we find the same spirit of the last days which marks the world, tragically dominating the church. It was so with the Jewish people in the days of Christ; the feasts of the Lord had become “feasts of the Jews” and the Temple of God had become “Your house left unto you desolate”. When “peoples rights” are opposed to “God’s rights”, God allows them their will for the time being, but it is a terrible state, for it cannot but end in disaster and Judgment. So “peoples rights and rule” in the church have made it “luke warm”. What is “luke warm”, which is a state neither cold nor hot, so that it will not (to use a popular form of advertising) ‘’Injure the most sensitive”, shall we say religi­ous feelings. You get that in a state where people are catered to.

Laodicea pictures the popular idea of Christianity of soft music and lights and sweet soothing words – so that no definite • reactions are roused either way. No one is stimulated to action, no one is offended. The Lord said He would have preferred them one way or the other. It is not a state of honest ignorance * but one of willing and willful ignorance. And why? Because they don’t want their beautiful ideas clouded by the stark realities and practical demands of God’s will. It is easier to practice good will in other peoples lives than God’s will in our own. People who hear and know the truth but shut themselves off from it. Not open, honest anta­gonism, but cloud banks, pretty pink and white ones of utter com­placency and indifference. It is of such the Lord says “I am about to spue thee out of My Mouth”.

He introduces Himself by a threefold statement r “These things saith”

(a)      “The Amen”, God’s last word, no matter what men say. The world has failed and so has the church, but He is the perfect ending, He v/ill in His own way complete God’s plan for the world.

(c)      “The beginning of the creation of God”, He was the begin­ning of creation; by the time of this passage it has shown its ruin and He will be the beginning of a new creation, after He has brought to a conclusion the affairs of this one. Certainly there is no foundation in these messages, or anywhere else in Scripture, for the prevalent idea of a church making the world into a Utopia of light and glory and peace.

The last of the seven parables of Matt. 13 shows it as a drag net, full of fish its true, but as many if not more, of bad fish as good. Notice it is the net (the church) spoken of. We expect the sea (the world) to hold all kinds; the bad in the net are to be re­jected, cast away thrown back into their true element. So in Rev, 3sl6 the Lord says He will reject these “luke warm” ones who have so rejected Him that He is left outside the door of their hearts and gatherings. He does not mention His coming by a word to them – the way in which He will reject them is by the gathering out of His faithful and leaving the rest to their chosen state. Remember the parable of the ten virgins – as many were left as were taken. The ones who were taken were the ones who had the oil for their lamps, (symbol of the Holy Spirit) and also they went out to meet the Bridegroom. The others slumbered and slept until too late, lost in dreams.

With Verse 17, the Lord describes them at their own evaluation and then at His. He begins by “Thou sayest”. How bold and com­placent, yes, and boastful is man. The Pharisee who said “I, I, I”. “I thank thee God that I am not as other men. I pay tithes of all I possess, etc.” and God says “He prayed with himself”. Do you think God is interested in your carefully drawn picture of self?

There was the rich fool of Luke 12 who said “What shall I do, for I have no room to store my goods. I will pull down my barns and build greater. I will say to my soul”, etc. etc. But God said “Thou fool, this night thy soul shall be required of thee”. Then what?

So this Laodicean spirit drugged with self opinion, while living on borrowed time says: “I am rich and increased with goods” but the saddest thing is that they say “I have need of nothing”. Perhaps those words stress their need as no others could, what can penetrate such utter self content and satisfaction.

Then the Lord gives the clinical report on true values “poor, wretched, naked and blind”. How self love hates such a statement 5 “thou knowest not”, indeed doesn’t want to know, such things. Then the counsel “Buy of He” – oh, we know salvation is free and cannot be bought, but in a sense the Laodicean spirit has to pay the price of laying aside all it felt so valuable. I suppose the thought here is more “exchange your gold for Mine, your rich clothing for My pure garment0, exchange the mirage for reality, the decaying for the un­fading. Then lastly, perhaps, their deepest need “Anoint thine eyes with eye salve that thou mayest see”. If ever the poets’ words were true –

“Oh wad the gift, the gods would gie us,
to see ourselves as others see us”

– they are today in this Laodicean age. The church rich, preening herself on her place, power and possessions, ignorant of real values, not seeing herself as she is before God. We need the Hand of the One who anointed the eyes of the blind to touch all our eyes, so that we may see many things.

The last thing, the last word to the professing church is a plea, a lament, to the blind hearts who can’t, who won’t, see. Yes, truly there are none so blind as those who won’t see. What are our values – the kind of Verso 18 are given to us by the processes of Verse 19. Then He speaks a last gracious invitation – this Lord who in Chapter 2 was standing in His peoples midst, now is outside the door, asking them to allow Him to come in and bless them. All the rich simplicity of the full gospel is seen in these words. Even though they cannot see, maybe some will hear His Voice and open the door – then, marvel of grace, He will come in.