2 March, 2014 in Uncategorized by archivist | No comments 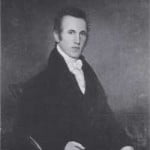 Our subject on Monday of this past week was the Rev. Gardiner Spring [1785-1873]. So for our Lord’s Day sermon today, we turn to a sermon delivered by Rev. Spring in 1816, when he was just 30 years old. Rev. Spring brought the following message on New Year’s Day, a message having to do with the subject of the revivals of religion.

Now this is a revival of religion. We do not pretend to have traced the features it uniformly bears, because it bears no uniform features. God is sovereign. “The wind bloweth where it listeth.” Still, wherever God is pleased to manifest His power and grace, in enlarging the views, in enlivening and invigorating the graces of His own people, and in turning the hears of considerable numbers of His enemies, at the same time, to seek and secure His pardoning mercy, there is a revival of religion. Read the rest of this entry »