March 20: A Comforter of Suffering Saints 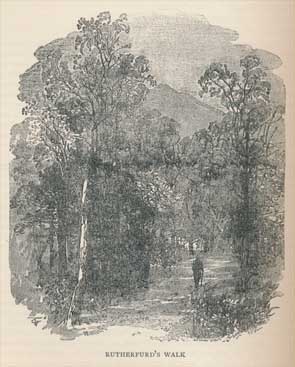 The young lad of five years old had been playing with some friends around a well when he tragically fell into it. The other children ran to his parents for help. They came, expecting him to be dead, but he was found cold and wet, sitting on a nearby   hill. Puzzled over his escape, they asked him how he climbed out of the deep well. He answered that “a bonny white Man drew me forth and set me down.” No other explanation was ever given as to who or what  this rescuer was, but his deliverance of young Samuel Rutherford preserved for time one of the stalwarts of the Reformed and Presbyterian faith in Scotland and England.

Samuel Rutherford was born in 1600 in the village of Nesbit, Scotland, to a prosperous farmer and his wife. Because of this background, Samuel was able to receive a good education, one which culminated at the University of Edinburgh, where he attended from 1617 to 1621. His prowess in Latin enabled him to immediately enter the teaching profession there at the University.

But it was as a pastor that he showed the spiritual gifts which would influence many a Covenanting heart to grow spiritually in the things of the Lord. Going to Anwoth in Dumfries and Galloway, Scotland, in 1627, he began to show his caring approach for the spiritual needs of the people. It was said by the members of his congregation that “he was always praying, always preaching, always visiting the sick, always catechising, always writing and studying.” To do all this, Pastor Rutherford rose up each day at 3 a.m. to engage in prayer and meditation.

His marriage at a young age brought both happiness and sorrow. His wife was often sick, once for thirteen months. She did eventually die, but not before bearing Samuel two children, though both of them followed their mother to death’s dark door.   He would marry again a “delightful” wife, but the personal sorrows continued, with only one of seven children surviving into adulthood. God clearly allowed these personal sorrows so as to make him a comforter of suffering saints. 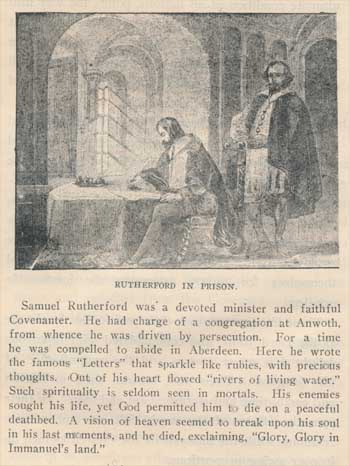 These were perilous times in Scotland. Preaching against the errors of Arminianism did not please the Anglican clergy. On July 27, 1636, Rutherford was barred from ministering to his parish upon the threat of rebellion if he continued. Exiled to Aberdeen, Scotland, and sorrowing over not just his loss of family, but also of God’s family, this was a difficult time indeed. But God often allows a hard experience so as to make one of his children a comforter to others in similar circumstances. It was at this time that Rutherford wrote numerous letters to other Christians, letters which helped them bear up through incredibly difficult times. These letters were eventually published by The Banner of Truth Trust. He was to stay in Aberdeen for 18 months.

In 1638, there occurred a reversal in the political situation, during which Presbyterianism was restored in Scotland.  Samuel Rutherford was appointed by the General Assembly of the Church of Scotland to a Professorship at St. Andrews University. He went there with the condition that he be allowed to preach at least once a week. His heart was in the pastorate. Five  years later, he went to London, England to participate as a Commissioner in the Westminster Assembly, where, along with the other four Scottish commissioners, he influenced that august gathering in a great way, even though he could not vote. [the Scottish commissioners were all of non-voting status in the Assembly.]  It was said of his four years there in London, that he was especially well-remembered by all for his work on the Westminster Shorter Catechism.

Rutherford’s magnum opus was titled Lex Rex. In this work he dealt with the subject of government and so effectively argued for limited government, that it was judged to be a direct attack on the divine right of kings.  When King Charles II read this book, he ordered it to be burned and a charge of high treason to be laid against Samuel Rutherford. Though summoned to appear before the king, Rutherford was at that time confined to bed with illness. He  turned down the summons, saying “I  must answer my first summons; and before your day arrives, I will be where few kings and great folks come.”  Samuel Rutherford died March 20:1661.