“There exists but a small number of letters exchanged between Knox and Calvin. Those of the Scotch Reformer alluded to [earlier in this letter] in Calvin’s answer, have been lost and the letters of the Reformer of Geneva have not had a better fate. Dr. McCrie, the learned historian of Knox, affords no explanation of the loss of this precious correspondence, which leaves in history a void so much to be regretted.” 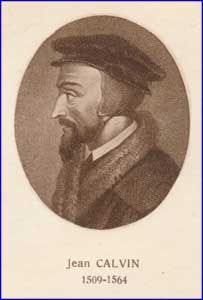 “. . . I come now to your letter, which was lately brought to me by a pious brother who has come here to pursue his studies. I rejoice exceedingly, as you may easily suppose, that the gospel has made such rapid and happy progress among you. That they should have stirred up violent opposition against you is nothing new. But the power of God is the more conspicuously displayed in this, that no attacks either of Satan or of the ungodly have hitherto prevented you from advancing with triumphant constancy in the right course, though you could never have been equal to the task of resistance, unless He who is superior to all the world had held out to you from heaven a helping hand. With regard to ceremonies, I trust, even should you displease many, that you will moderate your rigor. Of course it is your duty to see that the church be purged of all defilements which flow from error and superstition. For it behooves us to strive sedulously that the mysteries of God be not polluted by the admixture of ludicrous or disgusting rites. But with this exception, you are well aware that certain things should be tolerated even if you do not quite approve of them. I am deeply afflicted, as you may well believe, that the nobles of your nation are split into factions, and it is not without reason that you are more distressed and tormented, because Satan is now plotting in the bosom of your church, than you were formerly by the commotions stirred up by the French. But God is to be intreated that he may heal this evil also. Here we are exposed to many dangers. Nothing but our confidence in the divine protection exempts us from trepidation, though we are not free from fears.

Farewell, distinguished sir and honored brother. May the Lord always stand by you, govern, protect, and sustain you by his power. Your distress for the loss of your wife justly commands my deepest sympathy. Persons of her merit are not often to be met with. But as you have well learned from what source consolation for your sorrow is to be sought, I doubt not but you endure with patience this calamity. You will salute very courteously all your pious brethren. My colleagues also beg me to present to you their best respects.”

Words to Live By:
In my younger years in the ministry, this verse never failed to temper my agitated feelings against those who were my opponents in doctrine and life:
“And the Lord’s servant must not be quarrelsome but kind to everyone, able to teach, patiently enduring evil, correcting his opponents with gentleness, God may perhaps grant them repentance leading to a knowledge of the truth, and they may escape from the snare of the devil, after being captured by him to do his will.” — (2 Timothy 2:24-26, ESV)