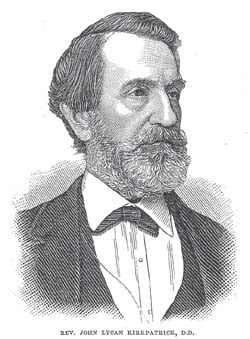 He did not serve God’s people with that which cost him nothing.

John Lycan Kirkpatrick was born in Mecklenburg County, North Carolina, on 20 January 1813. Alfred Nevin notes that his parents were pious Presbyterians, members of Providence Church, and that John was baptized by the Rev. James Wallis, pastor of that church. Nevin also provides information that his family moved to Morgan county, Georgia when he was four years old, and later to DeKalb county when he was 15. Kirkpatrick was educated at Franklin College, Athens, Georgia, attending there in 1830, and then transferring to Hampden-Sydney College and graduating there in 1832 with the Bachelor of Arts degree. He taught at Charlotte Court House, Virginia for two years, 1833-1834 and then moved on to train for the ministry at the Union Theological Seminary in Richmond, VA, 1834-1837.

He was licensed to preach by West Hanover Presbytery in March of 1837 and ordained by the same Presbytery in November of that same year, being installed in his first pastorate at the Second Presbyterian Church in Lynchburg, VA. He served that church as pastor from 1837-1841, and in the second year of that pastorate, married Mary Elizabeth Turner of Lexington, VA. Rev. Kirkpatrick and his wife subsequently moved to Gainesville, Alabama when Rev. Kirkpatrick answered a call to pastor the PCUS church there, remaining in that post, his longest pastorate, from 1841-1853. He next served as pastor of the historic Glebe Street Church in Charleston, South Carolina from 1853-1860. From roughly 1856 until 1860, Kirkpatrick served as the editor of The Southern Presbyterian.

Suffering for over a year from a painful malady, among his final words, shortly before he died, he wrote:

I trust I am prepared for whatever may be the will of my heavenly Father. It gives me courage now to recall my feelings at a time when I verily believed that a few hours only separated me from the realities of the great hereafter. I seemed to have no dread of meeting God. He did not wear the visage of an angry God, but of a loving father. My trust in my Redeemer was unshaken, and his righteousness all-sufficient. I thank him for the experience of that hour. It was not dying grace then, as I now know; but it was a token of the Saviour’s love, of unspeakable preciousness.

Honors conferred on John Lycan Kirkpatrick during his life include the Doctor of Divinity degree, conferred by the University of Alabama in 1852. He also served as Moderator of the General Assembly of the Presbyterian Church in the Confederate States of America (PCCSA) in 1862. Five published works have been located thus far. Dr. Kirkpatrick is also noted as the editor of The Southern Presbyterian, and undoubtedly many of his published works appeared in that journal.

Words to Live By:
“Let no one look down on your youthfulness, but rather in speech, conduct, love, faith and purity, show yourself an example of those who believe.” (1 Timothy 4:12, KJV) — And if that is Paul’s charge for younger men, how much more so for older men, to live as befits the Gospel of our Lord Jesus Christ. Indeed, we must all, men and women, so live as examples of those who believe. In your speech, your conduct, your love, faith and purity, live day to day with the purpose of honoring and glorifying the Lord who saved you by His grace.

Image source : Alfred Nevin, The Encyclopedia of the Presbyterian Church in the United States of America (1884), p. 1172.

Chronological Bibliography—
1840
Oration delivered before the Philistorian Society of Georgetown College, D.C. on the 22d of February, 1840 … to which are prefixed the remarks of W.L. Warren, Ga., previous to his reading the farewell address of Washington. (Washington [D.C.?] : Jacob Gideon, Jr., 1840), 16 p.

1845
The moral tendency of the doctrine of falling from grace examined: a sermon preached before the Synod of Alabama at the opening of its sessions in Gainesville, October 24th, 1844 (Mobile, Register and Journal Office, 1845), 28 p.