As we are now upon the annual season when the various Presbyterian denominations typically meet in General Assembly, the following short post seems appropriate to repeat here. It is taken from an 1836 issue of THE CHARLESTON OBSERVER. 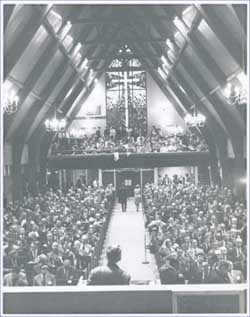 Attendance and participation in the courts of the Church—those meetings of the Session, the Presbytery and the General Assembly—always involve some level of personal cost and expense for each attendee. For some the cost is greater than for others. This is one reason why the meetings of Presbytery and General Assembly move regularly from one location to another, so that inconveniences are averaged out over time for all the officers of the Court.

All of this is nothing new. There have always been those who questioned the expense, and perhaps not without good reason, each in his own situation. But as you will read, there are also good and compelling answers urging upon Commissioners their full participation at the Courts of the Church.

For The Charleston Observer.

Mr. Editor.—Is it my duty to travel between four and five hundred miles, at an expense of at least fifty dollars [at least a month’s wages in 1836], for the sole purpose of attending Synod, when in all probability its business would be as well conducted without as with my presence? And in so doing I should be necessarily absent from the people of my charge two, if not three Sabbaths?
—A Member of Synod.

REPLY.—We answer,
1. Should every member of Synod conclude from similar premises that it was not his duty to attend, there would be no meeting at the time and place appointed, and of course no business done.

3. If the member can afford the expense it will be money well laid out, and if not, his people should aid him. The time occupied in going and returning, may often be profitably employed. The journey may be of advantage to his health. In conference with his brethren he may receive a new impulse in his Christian course, and be better prepared to  labor  with effect among his people on his return; so that neither he nor they will be losers by his absence.

6. The present crisis of the Church seems to demand more than ever a full attendance both of Ministers and Elders, cost what it may.

[With that last point, keep in mind that in 1836, the Old School/New School debate was raging in the Presbyterian Church, U.S.A., and the momentous split of those two factions came a year later]