August 11: A Homecoming Report with Challenging Questions for You

We take a largely ecumenical approach here at This Day in Presbyterian History. Though this blog is sponsored by the PCA Historical Center, we do not write exclusively about the PCA and its people. But it is a small world, and even in the history that follows, though this particular church has never been a part of the PCA, there are connections nonetheless. In this example, three of the pastors of the Union Presbyterian Church were also pastors of churches which later became part of the PCA:

In short, it is indeed a small world (cue music), and their history is our history, at least in part. With those connections explained, we turn now to the history of Union Presbyterian Church:—

In the 18th century, in those many years leading up to the Revolutionary War for independence, great numbers of Presbyterian Scots entered this new world we call America. While these Scots settled widely throughout the colonies, it is notable that Highland Scots particularly came to the region that was later to become Fayetteville, North Carolina. Finding dense forests of pines and many swamps, they hewed out a civilization for their families. But they didn’t abandon their Presbyterian convictions back in the old country. Their faith was alive and prospering in this new land as well. 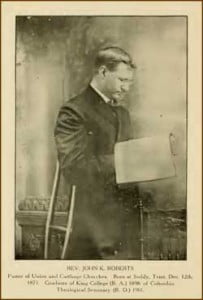 In an online history of Union Presbyterian Church of Carthage, North Carolina, we find an August 10th and 11th homecoming report which relates the history of this local church beginning in 1797.  The author of this history, the Rev. John Roberts (pictured at right), describes those earlier days when he writes:

“When Scotland turned to Protestantism, every village and hamlet cried out for the preached Word. There were not enough ministers to supply the demand. John Knox divided Scotland into Ecclesiastical Districts and appointed a minister or evangelist over each division to visit the churches, to baptize the children, receive members in the church and administer the communion. The regular Sabbath day worship was led by the local elders. John Knox prepared a liturgy for their use. Though not stated, one would infer from reading Foote’s ‘Sketches’ that Rev James Campbell inaugurated a somewhat similar plan through the Scotch settlements. When we remember the demoralization of the Revolution, the fierce hatred of a cruel internecine warfare through which the Scotch settlements passed, the devout character, the deep piety, the family altar, the catechetical instruction of the children, and the strict observance of the Lord’s day, (all this) can be explained in no other way than that every Scotch community had its place of meeting for the service of God upon the Sabbath day.”

What is important to remember in this brief description of their beginnings in a new land is their commitment to their Presbyterian convictions.  Just as was the case in Scotland in the beginning days of the Reformation there, under John Knox, so here in the early days of the colonies, each home was a congregation unto itself. What stood out to this author was that in those early days, there was found “devout character, deep piety, a family altar, catechetical instruction of the children, strict observance of the Lord’s Day, and a place of meeting for the service of God on the Christian Sabbath. All this, the Scotch communities in America had in common. They kept the families of God together when ministers were scarce in the land.

Words to Live By: Suppose in all of your congregations of which you are a member, the pastors were removed. The question is, with their absence from the congregation, would biblical Christianity continue? In other words, would home religion as evidenced by your devout characters, your deep piety, the family altar, continued catechetical instruction in the Westminster Shorter Catechism, and your observance of the Lord’s Day continue? If so, how long? This is a solemn question to ponder, perhaps pray about, to examine yourself spiritually, and to return to sacred habits begun earlier in your life, but forsaken in time.

Hebrews 10:22 – 25 says “Let us draw near with a sincere heart in full assurance of faith having our hearts sprinkled clean from an evil conscience and our bodies washed with pure water. Let us hold fast the confession of our hope without wavering, for He who promised is faithful; and let us consider how to stimulate one another in love and good deeds, not forsaking our own assembling together, as is the habit of some, but encouraging one another; and all the more as you see the day drawing near.“ 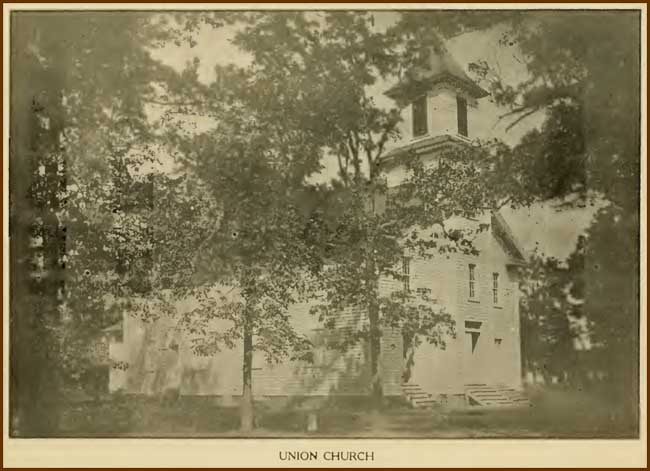