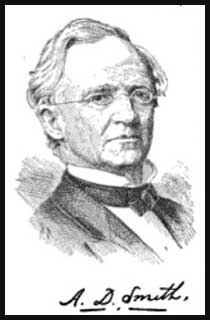 So it was that in 1863, the Rev. Asa Dodge Smith became the seventh president of Dartmouth College. Inaugurated in 1863, he served as president until his death on August 16, 1877, at the age of 73.

Q. What is the chief end of man?
A. Man’s chief end is to glorify God and to enjoy Him forever.

For Further Study:
To view the gravesite of Rev. Smith, click here.

A Partial Bibliography—
[a number of these works can be found online at either Archive.org or HathiTrust.org]

1832
Letters to a young student, in the first stage of a liberal education.

1848
Importance of a scriptural ministry : a sermon delivered before the Synod of New York and New Jersey, at Newark, October 18, 1848.

1851
The guileless Israelite : a sermon on occasion of the Death of Mr. Joseph Breuster, delivered in the Fourteenth Street Presbyterian Church. New York, June 29, 1851.

Obedience to human law : a discourse delivered on the day of public thanksgiving, December 12, 1850, in the Brainerd Presbyterian Church, New York.

1852
Personal piety as related to the missionary work. A sermon delivered before the Foreign Missionary Society, of New-York and Brooklyn, April 4 and 11, 1852.

God’s word magnified and illustrated. A sermon on occasion of the death of Mr. David L. Dodge, delivered in the Fourteenth street Presbyterian church, New York, May 9, 1852.

1857
Home missions and slavery: a reprint of several articles, recently pub. in the religious journals; with an appendix.

1863
An address delivered at the inauguration of the author as president of Dartmouth college, November 18, 1863.

1866
Abuses of the imagination. A baccalaureate discourse, delivered at Dartmouth college, July 15, 1866.

1871
Liberty as related to law; a baccalaureate discourse delivered at Dartmouth College, July 16, 1871.

1874
The creed as related to the life; a baccalaureate discourse, delivered at Dartmouth College, June 21, 1874.