17 August, 2014 in Uncategorized by archivist | No comments

It Remains a Message for Our Time. 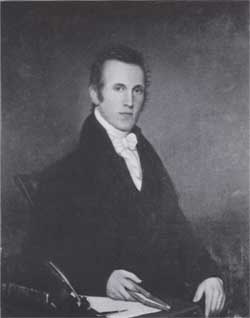 This day, August 18th, marks the death, in 1873, of the Rev. Gardiner Spring. He was already 76 years old when he proposed his “Resolutions” at the General Assembly of the Old School Presbyterian Church in 1861. Those were the Resolutions that split the denomination North and South. But long before Spring achieved infamy with his “Resolutions,” he had been, since 1810, the pastor of the Brick Church in New York City. In fact, his entire ministerial career of 63 years was spent at this one church.

Born in 1785, he was educated at Yale and for a short time practiced law before entering Andover Theological Seminary to prepare for the ministry. A powerful preacher, he became a prominent pastor in that City and in the Church at large. Spring made great use of the press as an auxiliary to his preaching of the gospel, and a number of his works remain in print to this day. In 1816, Rev. Spring brought the following message on New Year’s Day, a message having to do with the subject of the revivals of religion.

The passage just recited may give a direction to our thoughts. When Hezekiah came to the throne Aof Judah, he found religion in a low and languishing state. His father Ahaz was not only an idolatrous king, but notorious for his impiety. The torrent of vice, irreligion, and idolatry, had already swept away the ten tribes of Israel, and threatened to destroy Judah and Benjamin. With this state of things, the heart of pious Hezekiah was deeply affected. He could not bear to see the holy temple debased, and the idols of the Gentiles exalted; and though but a youthful prince, he made a bold, persevering, and successful attempt to effect a revival of the Jewish religion. He destroyed the high places; cut down the groves; brake the graven images; commanded the doors of the Lord’s house to be opened and repaired; and exhorted the Priests and Levites to purify the temple; to restore the morning and evening sacrifice; to reinstate the observation of the Passover; and to withhold no exertion to promote a radical reformation in the principles and habits of the people.

Now this is a revival of religion. We do not pretend to have traced the features it uniformly bears, because it bears no uniform features. God is sovereign. “The wind bloweth where it listeth.” Still, wherever God is pleased to manifest His power and grace, in enlarging the views, in enlivening and invigorating the graces of His own people, and in turning the hears of considerable numbers of His enemies, at the same time, to seek and secure His pardoning mercy, there is a revival of religion. END_OF_DOCUMENT_TOKEN_TO_BE_REPLACED