“The judicatories of the church shall ordinarily sit with open doors. In every case involving a charge of heresy the judicatory shall be without power to sit with closed doors. In other cases, where the ends of the discipline seem to require it, the trial judicatory at any stage of the trial may determine by a vote of three-fourths of the members present to sit with closed doors.”
—Chapter IV, The Trial of Judicial Cases, The Book of Church Order of The Orthodox Presbyterian Church. 2011 edition, Section A.1.b., page 102.

As it turns out, the OPC has had this provision in their Book of Church Order ever since that document was first approved in 1938. Three denominations in fact, the OPC, the BPC and the RPCES—each looking back in common heritage to the modernist controversy of the 1930s—retain or retained virtually identical wording in their respective Books of Discipline.

But where did this otherwise unique stipulation come from? It appears to have been a response to an ecclesiastical trial, one in which two lay people, Mary W. Steward and Murray Forst Thompson, were tried in secret, behind closed doors, for their refusal to step away from their participation in the ministry of the Independent Board for Presbyterian Foreign Missions. This event led Dr. J. Gresham Machen to write at some length opposing secrecy in the courts of the church. To my knowledge, this particular work by Dr. Machen has never before been reprinted. 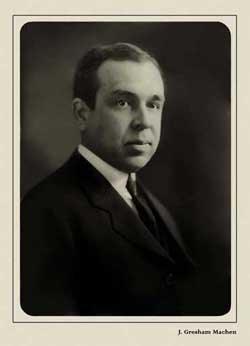 The Bible bids us walk honestly as in the day; it bids us commend ourselves to every man’s conscience in the sight of God.

These commands are very broad in their application, but whatever else they require, they certainly require great openness in our relationship with one another and in the conduct of the affairs of the Church.

The Discouragement of Public Discussion

In marked contradiction to these Biblical commands, the ecclesiastical bureaucracy in the Presbyterian Church in the U. S. A. discourages open discussion and seeks to withhold from the laity and the public what is really going on in the Church.

“If you do not like what the General Assembly does,” we are told in one form or another again and again, “use the ‘constitutional’ means of redress, but do not use the pulpit and the radio and the public press to air your criticisms; do not in that fashion disturb the peace of the Church.”

I think the appeal by the advocates of this policy of secrecy and bureaucratic tyranny to the Constitution of the Presbyterian Church in the U. S. A. is one of the strangest things among all the strange things that are happening just at the present time. As a matter of fact, such a policy is abhorrent to the very heart and core of that Constitution.

There are many reasons why that is so. But one reason has sometimes escaped notice. It is the reason found in the democratic character of the government of our Church.

The Standards of the Presbyterian Church in the U. S. A. require absolute subjection of all to God; but, so far as the human instruments of church government are concerned, they place the power and the responsibility—always subject in all things to the Word of God—in the hands of the rank and file.

How must they be presented? Obviously by the only means in which the rank and file can be reached—by the pulpit, the press, and every other means that may be used in communication among men.

Let it never be forgotten. The government of our Church is, on the human side, a government by the people. For that reason, therefore, if for no other and still more important reasons, the people should not be kept in ignorance. If the General Assembly does something that is wrong—if, for example, it establishes a Modernist board of foreign missions—that is not the business merely of committees or boards, but it is the business of every man, woman and child in the Church.

In asking us to keep the facts from the laity, and to reserve our criticisms of the General Assembly or the Boards for the privacy of committee rooms, the present ecclesiastical bureaucracy is asking us to do something that is against the inmost heart of the Constitution of our Church and is profoundly contrary to the Word of God.

The Disgrace of Secret Courts

At one point the policy of secrecy in ecclesiastical affairs becomes an offence to all fair-minded people whether in the Church or outside of it.

That point is found in the secrecy of church courts. In several of the “trials” of members of The Independent Board for Presbyterian Foreign Missions, the first decision of the court—reversed only after the appearance of a rising tide of public disapproval—was to close the doors; and this policy of secrecy has again been decided upon by a vote of the session of the Hollond Memorial Presbyterian Church of Philadelphia in the trial of Murray Forst Thompson, Esq., and Miss Mary W. Stewart.

The session seemed to lay great stress upon that vote. It was put through, by an alleged majority of 6 to 3, in the most hasty and illegal manner. Apparently great stress was laid upon keeping the public in ignorance of what was going on.

What will be the result? The result will be that the findings of such a court will utterly fail to win the respect of fair-minded people either within the Church or outside of it. Court proceedings certainly ought to be open and above-board; and the general public has a pretty shrewd notion that a thing which is not open is not very apt to be above-board.

That notion may be right or it may be wrong; but at any rate people generally will hold to it. Our Form of Government says that one of the things that give ecclesiastical discipline its force is “the approval of an impartial public.” Well, it is perfectly clear that no impartial public is going to have much respect for courts that deprive an accused person of the right of an open hearing.

That right is accorded the most degraded criminal under our civil laws. If men are deprived of it in church courts, that means that the Church is standing on a lower moral plane than the world at large. Religion will seem to many people to be little more than a delusion and a sham when it is made a cloak for tyranny such as that.

The Remedy for Secrecy

The answer is very simple. The remedy for darkness is light.

Specious arguments are sometimes used to commend a contrary policy. The Church, it is said, ought to discuss her affairs quietly and not make a spectacle of her quarrels in the presence of a hostile world.

But such arguments are miserable half-truths. The Church cannot conceal her faults, even if she should desire to do so. The very attempt at concealment will make her seem all the more contemptible to those who are without.

Instead, she ought to stand forth openly in the light of day. She has never claimed to be perfect. God knows, and the world knows, that she has sin within her walls. But at least she ought not to claim to be better than she is. Light is sometimes very painful when it shines into dark places, but it is beneficent in the end.

So the long policy of concealment ought now to cease. We ought to break away from it resolutely and radically. We ought to present the full facts about the Presbyterian Church in the U. S. A., so that they may be known to all.

But how may the facts be made known?

There are many ways of making them known—the pulpit, the public press, the spread of information from man to man.

But the best way of all to make them known is to have a journal that shall present them fully and fearlessly and connectedly to all who will read. There is now great need of such a journal, but we are soon to have the need supplied by the appearance of THE PRESBYTERIAN GUARDIAN. AS is announced elsewhere in this issue of THE INDEPENDENT BOARD BULLETIN, the new paper is to be the organ of The Presbyterian Constitutional Covenant Union. It is to be under the editorship of the Rev. H. McAllister Griffiths. It will satisfy many needs of Christian people. It will appeal to young and old. But a very important part of its function will be the presentation of the facts about the condition of the Church.

The time has gone by, if there ever was such a time, when Christian people, particularly in the Presbyterian Church in the U. S. A., could afford to be in ignorance of the facts. We must know the facts in order that we may lay them before our God in prayer and ask Him to give us courage to act in view of them as Christian men and women ought to act.