John Ulverstone Selwyn Toms
[26 October 1878 – 14 November 1973]
Excerpted from the Minutes of the Bible Presbyterian Synod, 1974, pp. 38-39.
A Memorial Resolution, #7. on the death of the Rev. U. Selwyn Toms was presented by the Rev. Morris McDonald. It was on motion adopted and reads:
RESOLUTION NO. 7 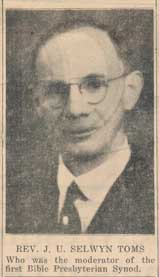 IN MEMORIAM – REV. J. U. SELWYN TOMS
The Rev. Mr. Toms went into the Lord’s presence on November 14, 1973, in his sleep, at the age of 95. Mr. Toms was born in 1878 in South Australia. He was graduated in the class of 1908 from Princeton Seminary, a classmate and friend of the late Dr. J. Gordon Holdcroft. Upon graduation he was licensed by the West Jersey Presbytery of the Presbyterian Church in the U.S.A. On October 27, 1908 he and his wife, Ella Sparks Burt, sailed for Korea to serve at Taegu and Seoul stations. They had three children, Robert, Burton and Elaine. Rev. Burton Toms was born in Seoul, Korea, and is at present serving the Lord under the Independent Board for Presbyterian Foreign Missions.

Having returned from the mission field in 1923, due to the ill health of his wife, Mr. Toms served as pastor of the Thompson Memorial Church in Pennsylvania and after four years, as pastor at the Presbyterian Church of Woodstown, N.J., on July 31, 1936, Mr. Toms felt it was necessary to withdraw from the Presbytery due to un-Presbyterian actions.

Mr. Toms was elected to the Board of the Independent Board for Presbyterian Foreign Missions on May 31, 1937 and actively served until health prevented his attendance in 1966.

For many years he served as the faithful statistician of the Bible Presbyterian Church. Mr. and Mrs. Toms made their residence In Chattanooga, Tennessee, with their son Robert. Mrs. Toms had gone to be with the Lord in November, 1971. “Blessed are the dead which die in the Lord from henceforth; Yea, saith the Spirit, that they may rest from their labours; and their works do follow them.” – Revelation 14:13.
Mr. Toms served as a faithful member of the Kentucky-Tennessee Presbytery for many years prior to going to his higher reward.

As per the OPC Ministerial Register (2011):
John Ulverstone Selwyn Toms was born in Waller, New South Wales, Australia, on 26 October 1878.
He married Ella Burt on 10 October 1905.
Children born to their marriage included Robert, Frederick, and Marian.
He was educated at Wheaton College in Wheaton, Illinois, graduating there in 1905 with the A.B. degree.
He prepared for ministry at Princeton Theological Seminary, graduating in 1908 with the Th.B. degree and later returned to Princeton for the Th.M. degree, in 1924.
Rev. Toms was ordained by the Presbytery of West Jersey (PCUSA), on 2 July 1908.
From 1909-1923, he served as a evangelist in Korea under the auspices of the Board of Foreign Missions (PCUSA).
He was pastor of the Thompson Memorial Presbyterian Church (PCUSA), Brownsburg, Pennsylvania, 1924-1928.
From 1928-1936, he was pastor of the PCUSA church in Woodtown, New Jersey.
Rev. Toms was received by the Presbytery of New Jersey (Presbyterian Church of America/Orthodox Presbyterian Church, on 8 September 1936, but later withdrew to become a founding member of the Bible Presbyterian Church, on 6 September 1938.
His date of death was 14 November 1973.