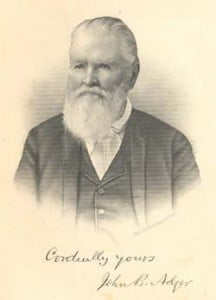 John Bailey Adger, D.D., died in Pendleton, South Carolina, on the 3d of January in the 89th year of his age.

Dr. Adger was born of Scotch-Irish parentage in Charleston, S.C., December 13, 1810. He graduated when 18 years of age at Union College, Schenectady, N.Y., and at Princeton Theological Seminary in 1833, of which, at the time of his death, he had been for some time the senior surviving alumnus. Shortly after his ordination by the Charleston Union Presbytery in 1834, he went as a missionary to the Armenians, under appointment of the American Board of Commissioners for Foreign Missions, and served in this work for twelve years at Constantinople and Smyrna, until the failure of his eyes and other circumstances compelled hisi withdrawal from the foreign field. During his missionary service he translated into Armenian the New Testament, Pilgrim’s Progress, the Shorter Catechism, and other books, which translations are still in use among that people.

After his return home he engaged in work ministering the Gospel among the black slaves in his own native city. A church, connected with the Independent Presbyterian Synod, whose house of worship stands hard by his late residence in Pendleton, is appropriately named for him, “The Adger Memorial Church.”

Upon the withdrawal, in 1856, of Dr. Palmer from the Chair of Ecclesiastical History and Church Polity in the Columbia Theological Seminary, Dr. Adger was elected his successor, and filled that position with great zeal and ability for seventeen years. After his retirement in 1874, although he had then reached the age of 64, he entered with energy and vigor upon the pastoral work in his own Presbytery of South Carolina, which he continued until, having attained the age of 83, he was reluctantly constrained, by physical infirmities, to give up the public preaching of the Gospel.

At this advanced age, and amid these hindering infirmities, with courage and energy, he undertook what was perhaps the greatest task of his life, the writing of a large book, which he called My Life and Times. His life had been a long one, the times through which he had passed, eventful in Church and State; and he undertook to write a history and discussion of the various questions he had to meet and help to solve. With the assistance of a devoted daughter, and such other help as he could procure, he gathered up the facts, studied out the questions, and dictated chapter after chapter of his book. His mind, still clear and vigorous, and his body wonderfully strong and active, he labored systematically and diligently for several years at this work. And almost as soon as the last chapter was finished, the last page written, and the valiant servant of God had laid down his fruitful pen, the Master called him to the everlasting rest.

Words to Live By:
Have you disciplined yourself to take notice of God’s providence in your life? Those providences are expressions of God’s love, mercy, and faithfulness. As John Flavel has said,

Search backward into all the performances of Providence throughout your lives. So did Asaph: ‘I will remember the works of the LORD: surely I will remember thy wonders of old. I will meditate also of all thy work, and talk of thy doings’ (Psalm 77:11, 12). He laboured to recover and revive the ancient providences of God’s mercies many years past, and suck a fresh sweetness out of them by new reviews of them. Ah, sirs, let me tell you, there is not such a pleasant history for you to read in all the world as the history of your own lives, if you would but sit down and record from the beginning hitherto what God has been to you, and done for you; what signal manifestations and outbreakings of His mercy, faithfulness and love there have been in all the conditions you have passed through. If your hearts do not melt before you have gone half through that history, they are hard hearts indeed. ‘My Father, thou art the guide of my youth’ (Jeremiah 3:4). —From The Mystery of Providence, chapter nine.