Today’s post is an excerpt from a longer article written several years ago for the PCA Historical Center by Dr. Barry Waugh. 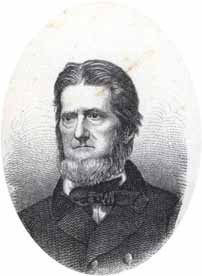 Robert Jefferson Breckinridge, a leading figure among Old School Presbyterians in the effort to expunge New School elements from the denomination in 1837, died on this day, December 27, in 1871.

The Civil War has been described as the war of brother against brother and father against son and this was especially true in the case of Robert J. Breckinridge and his family. As the war progressed and victory seemed to be coming to the Union, Kentucky turned more of its support to the south because of Lincoln’s emancipation of the slaves. This conflict within Kentucky was reflected among Robert’s descendants and kin. His sons, Robert Jr. and Willie, took sides with the southern cause against their father. Issa Breckinridge, Willie’s wife, was particularly angry with Robert and his support of the north, and in protest, she would not let him see two of their newest children until Willie convinced her to do so in 1867. Theophilus Steele, the husband of Robert’s daughter, Sophonisba, donned Confederate gray and rode with John Hunt Morgan. It is likely that Robert’s intervention with the Union Army resulted in Edwin M. Stanton’s imprisoning Theophilus as a prisoner of war rather than executing him as a guerilla raider when he was captured by Union forces. Robert’s nephew, John C. Breckinridge, became a southern Democratic candidate for the presidency when the pro-slavery forces were the minority at the 1860 Democratic National Convention that nominated Stephen A. Douglas to run against Lincoln. Despite these kin turning against R. J., his sons Joseph and Charles along with three sons-in-law fought with Lincoln’s forces.

The tensions Robert faced within Kentucky increased when he was nominated to the Baltimore convention that re-nominated Lincoln in 1864, and he made a speech at the convention denouncing the anti-union position of many Kentuckians. James Klotter notes that James G. Blaine, who had just entered the U. S. House of Representatives in 1863, commented that Breckinridge’s appearance was strong and “patriarchal” and that his speech was the most inspiring of the convention. The speech was against slavery and Blaine’s praise may reflect his sectional perspective just as a lady from Charleston had once shown her southern sympathies in her assessment of Breckinridge’s preaching. Lincoln managed to carry Kentucky in 1864 with the smallest margin of victory achieved by any of the states voting for his return to office.

The closing years of Breckinridge’s life included another marriage after eight years as a widower. His third wife was Margaret Faulkner White, whom he married on November 5, 1868. As age slowed Robert Jefferson Breckinridge, he left his professorship at Danville in December 1869 and he died in Danville on December 27, 1871 after an extended illness. Breckinridge’s life and work had been tumultuous and colorful. He had survived as a vocal opponent of slavery in Kentucky, he had been a leader of the Old School in its ejection of the New School, he had improved the quality and quantity of Kentucky education, and he had worked to bring ministerial education to the rough Kentucky frontier at Danville Seminary.

Just as R. J. Breckinridge came from a notable ancestry, his family and descendants also enjoyed prominence. Robert and his first wife, Ann Sophonisba, had eleven children together, six girls and five boys. One daughter, Mary Cabell, married William Warfield in 1848 and on November 5, 1851, Benjamin Breckinridge was born. B. B. Warfield would mature in Kentucky and be educated for the ministry at Princeton Seminary. Warfield then served as a professor at Western Theological Seminary from 1878 to 1886 when he moved to Princeton to become the Professor of Theology at the seminary and remained there until his death on February 16, 1921. William “Willie” Campbell Preston Breckinridge, married a Kentuckian, Lucretia Clay, the granddaughter of Henry Clay, and he, like Henry Clay, worked in politics. Willie served in congress from 1884 to 1892. Robert’s second wife, Virginia Hart Shelby, had been married to Alfred Shelby, who was the son of Isaac Shelby, Kentucky’s first governor (1792-1796) as well as the fifth (1812-1816). Isaac had also fought in the Revolutionary War and commanded the troops that defeated the British at the battle at King’s Mountain, North Carolina.

Words to Live By:
“Think not that I am come to send peace on earth:I came not to send peace, but a sword. For I am come to set a man at variance against his father, and the daughter against her mother, and the daughter in law against her mother in law. And a man’s foes shall be they of his own household. He that loveth father or mother more than me is not worthy of me:and he that loveth son or daughter more than me is not worthy of me. And he that taketh not his cross, and followeth after me, is not worthy of me. He that findeth his life shall lose it:and he that loseth his life for my sake shall find it.”—Matthew 10:34-39, KJV.