Whether it is from the original Trinity hymnal on page 35, or the red Trinity Hymnal on page 38, both editions of this Presbyterian and Reformed hymnal have the majestic hymn “Immortal, Invisible, God only Wise.” The tune was taken from a traditional Welsh ballad, but it is the words, not the tune, which stand out to any worshiper who sings its biblical phrases.

“Immortal, Invisible, God only Wise,” is found in the benediction of Paul to young Timothy, when he says,” Now unto the King, eternal, immortal, invisible, the only wise God, be honour and glory for ever and ever. Amen.” —(1 Timothy 1:17, KJV).

Continuing on in the first verse, line three, the hymn writer refers to God as the Ancient of Days, in speaking of “Most blessed, most glorious, the Ancient of Days, Almighty Victorious, Thy Great Name we praise.” This title of God comes from Daniel 7:9, where the Old Testament prophet says that he “beheld till the thrones were cast down, and the Ancient of Days did sit . . . .”

Then in the second line of the second verse, we sing “Thy justice like mountains high soaring above,” we think of Psalm 33:6 the Psalmist saying “Thy righteousness is like the great mountains; Thy judgments are a great deep.”

There are two other verses which the hymn author wrote, but which are left out of our Trinity Hymnal. They are: “To all life thou givest, to both great and small; In all life thou livest, the true life of all; We blossom and flourish as leaves on the tree, And wither and perish; but naught changeth thee.” The second verse not included in the Trinity Hymnal reads “All laud we would render; O help  us to see ‘Tis only the splendor of light hideth thee, And so let thy glory, almighty, impart, Through Christ in his story, thy Christ to the heart.”: 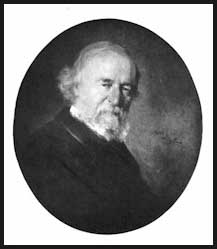 The author of this majestic hymn was Walter Chalmers Smith, born this day December 5, 1824 in Aberdeen, Scotland. He was educated in the elementary schools of that town and for his higher learning, graduated from New College, Edinburgh. Walter Smith was ordained in 1850 in the Free Church of Scotland and served four churches in that Presbyterian denomination. His longest pastorate was in Edinburgh. He was honored by his fellow elders when in 1893, he was elected Moderator of the General Assembly in the Jubilee year of the Free Church of Scotland.

It was interesting that it took several years before this hymn surfaced in print, being found for the first time in 1876 in his “Hymns of Christ and the Christian Life.”

Words to Live By:
In the familiar acrostic of A.C.T.S, standing for that prayer outline of Adoration, Confession, Thanksgiving, and Supplication, we could easily sing the stanzas of this majestic hymn and go a long way toward fulfilling the Adoration part of our prayers. It is that full of praise. So the next time you sing it in one of our Presbyterian congregations, sing the words with your heart and voice as you adore God’s person.