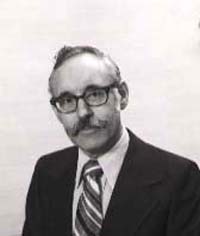 Dr. J. Barton Payne joined the faculty of Covenant Theological Seminary in 1972, having taught previously at Bob Jones University, the Wheaton Graduate School of Theology, and Trinity Evangelical Divinity School. He was an active member of the Evangelical Theological Society, and an ardent student of Reformed Presbyterian history. A member of Illiana Presbytery (RPCES) at the time of his death in 1979, he died in Japan while on sabbatical, in a climbing accident on Mount Fuji.

The following sermon is drawn from among Dr. Payne’s papers preserved at the PCA Historical Center.

Standing in first place in Wheaton’s statement of faith is the affirmation, “We believe in the Scriptures. . . as verbally inspired by God and inerrant in the original writings.” The importance of this commitment is clear: it places Wheaton squarely in the position of historic evangelicalism, or, to put it negatively, in opposition to the majority of organized Protestantism. Further, it gives to Wheaton a voice of authority in today’s relativistic world, an assured knowledge of specific truths that constitute distinctive criteria in the various academic disciplines, for example, in anthropology, of man’s special creation; in literature, of the prohibition of blasphemy; or in ethics, of absolute moral purity. The question, then, to be considered is the desirability of such a distinctive position. Why should we hold to the Bible, when the belief means accepting a minority status in Christendom and the stigma of “fundamentalist mentality” in the world as a whole. Put bluntly, Why do we do this? Is it worth it?

Essentially, I feel there are two different ways of approaching Scripture, or for that matter of approaching life in general: either trust in oneself, the internal approach, or trust in someone else, the external. Both are matters of trust, but it is a question as to which approach provides the more plausible basis. Frankly, I believe the second to be correct: the first can be dismissed as patently inadequate. For if a man has no higher standard than himself, this results in the hopelessness that characterizes so much of modern western thought. Life is beyond us; we are here just a short time and tomorrow we die and are gone. Further, from what we can deduce from our own natural observation, there is no hope beyond the grave. Corliss Lamont’s realistic study, “The Illusion of Immortality,” has been sobering to me, as it demonstrates that there can be no permanence, no transcendent meaningfulness to my life that is, if all we have is our own, internal judgment. Correspondingly, subjective criticisms, based on internal judgments, of the Bible do not really bother me, even though this is the basis on which most thinkers, and even Protestant thinkers, have rejected Biblical infallibility. For example, Millar Burrows, in his Outline of Biblical Theology (pp. 44, 47), begins by saying,

Much ink has been wasted . . . in the effort to prove the detailed accuracy of the biblical narratives. Actually they abound in errors . . . In the field of the physical sciences we find at once that many mistaken and outmoded conceptions appear in the Bible . . .

Archaeological research has not, as is often boldly asserted, resolved difficulties or confirmed the narrative step by step . . . Even in matters of religious concern the Bible is by no means of uniform value.”

[Please note that the above quotation is not Dr. Payne’s view; he is merely citing the view of Millar Burrows as typical of a view of Scripture with which he, Dr. Payne, disagrees. Please don’t misread this, as I did earlier today. Dr. Payne had a high view of Scripture.]

But the whole approach of this “I must pick and choose” position has been well answered by Louis Berkhof in his Introductory Volume to Systematic Theology (p.158)

The reasoning of those who take this position often sounds very plausible. They do not want a  theory of inspiration that is imposed on Scripture from without, but one that is based on an inductive study of the facts. But . . . it does not fit the case. According to it man faces the phenomena of Scripture just as he faces the phenomena of nature . . . which he must interpret and set forth in their true significance . . . He places himself above Scripture as judge, and opposes to  . . . testimony . . . his own insight.

But to whose testimony then can we go? Who is the “someone else” to trust? The response for the Christian is clear, namely Peter’s in John 6:68, “Lord; to whom shall we go: Thou hast the words of eternal life.” Christ, who has been declared to be the Son of God with power by His resurrection from the dead, is my answer to this world’s relativism. But it is here, from the viewpoint of the external authority of Jesus Christ, that Wheaton’s statement of faith in Scripture has, in recent days, received its more serious challenge, from neo-orthodoxy; and I am here using the term broadly for those who claim to be followers of Christ as king but who repudiate the Bible as a divine, binding document. One of my former seminary professors has called “the idea of inerrancy a ‘sub-Christian doctrine’ ” (Aaron Ungersma, Handbook for Christian Believers, p. 8l); and James D. Smart, in his recent volume, The Interpretation of Scripture, has well expressed both neo-orthodoxy’s belief and its disbelief: (pp. l6l, 199; 205):

This is not to deny, nor does Smart deny, that the Bible contains teachings on its own inerrancy. But this alternative is proposed: forget these teachings; believe in the revelation of God through Jesus Christ, but dispense with the objective inspiration of the Bible.

Let us not, moreover, underestimate the reality of this appeal: why not escape the restraints of traditional orthodoxy, and yet retain the peace and integration of one who, say, has come forward at a Billy Graham meeting and found eternal meaningfulness in that “someone else” who is Christ? In particular I faced this appeal this last spring while in archaeological work with Dr. Free in Palestine. In my classes, students were enrolled from a number of different colleges and seminaries; and hardly a session would pass without somebody’s saying, “Why do I as a Christian have to believe XXXX, just because the Bible says it?” These questions, moreover, were not without basis: much of the Old Testament data is never mentioned by Christ. So finally, when time was available, I got away under a tree on the mound of Dothan, and prayed, “Alright, Lord, I am putting this matter up to Thee. I am willing to forget that I was ever a biblical evangelical, but show me what Christ would have me do.” Then I went through the complete records and words of Jesus asking myself, Does this really require me to hold to the Bible? Let me share with you four conclusions that I formulated.

No prophet is accepted in his own country. But I tell you of a truth, many widows  were in Israel in the days of Elijah, when the heaven was shut up three years and six months, when great famine was throughout all the land; but unto none of them was Elijah sent, save unto Zarephath, a city of Sidon, into a woman that was a widow. And many lepers were in Israel in the time of Elisha the prophet; and none of them was cleansed saving Naaman the Syrian.

Is He just quoting the well known Old Testament “stories”? On the contrary, He confirms the historical validity of even details in the record of Matthew 11:41 and Luke 11:50-51. Similarly, Christ accepted as fact so-called mythical or legendary events that Scripture associated with Adam and Eve, Cain and Abel, Noah’s flood, the destruction of Sodom, Jonah in the fish and Nineveh’s repenting, as well as others.

We must face it: no negative critic can maintain today’s usually accepted conclusions and still find correspondence with the mind of Christ on these points.

Have ye not read, that He with made them at the beginning made them male and female and said, For this cause shall a man leave father and mother, and shall cleave to his wife…

quoting Genesis 2:24. But while in Genesis this verse is simply part of the Mosaic narrative, Christ introduces it as a statement by the Creator:  that is, for Him, the words of Genesis are equivalent to the very words of God. The only alternative to such a conclusion is to assume that the Gospel writers have misrepresented Him and do not depict the actual mind of Christ. The previously quoted neo-orthodox writer, James Smart, for example, is forced to a number of such reservations, and says,

Already in the Gospels there are perceptible indications of the tendency to attribute to Jesus in his earthly life both omniscience and omnipotence (e.g., his power over waves and storms and his ability to tell the Samaritan woman the story of her marriages. (Interpretation of Scripture, p. l62)

In other words, when neo-orthodoxy claims that “in Christ’s actions God acts,” it may do so while avoiding the evidence, shifting on internal, subjective grounds, away from the supernaturalistic beliefs of those who were closest to the events. Smart would then cover his procedure by introducing an over-emphasis in the other direction which his evangelical opponents do not claim, namely the idea of omniscience for the incarnate Jesus. There is the one known case, Mark 13:32, in which our Lord disclaimed omniscience, about the time of His second coming. But His own words made this limitation clear; and when He does commit Himself in speaking He possesses truthfulness (John 3:34). To take issue with Christ involves more than His lack of omniscience; it involves His falsehood. Hence Sigmund Mowinckel, a leading advocate of modern Scandinavian Biblical criticism, in his study The Old Testament as Word of God (p.74), seems to have faced the implications of Christ’s Biblical views more squarely, when he concludes,

If it is true that .Jesus as a man was one of us except that he had no sin (Heb. 4:15), then he also shared our imperfect insight into all matters pertaining to the world of sense . . . He knew neither more nor less than most people of his class in Galilee or Jerusalem concerning history . . . geography, or the history of biblical literature.

Here the issue is clear cut. Biblical criticism inevitably entails criticism of Christ. When I got up from under that tree at Dothan, it was with renewed conviction that the consistent follower of Jesus must be a humble follower of the inscripturated word, just as his Master was. Billy Graham’s message of peace, assurance, and power is inseparably associated with his confidence in what “the Bible says.” And if Wheaton ever exchanges its Biblical commitment for status in Protestantism or for a mentality acceptable in the world as a whole, it will have done so in opposition to Christ and His kingdom.