He Saw God in His Power

In the passage that follows, the Rev. Stuart Robinson [1814-1881] briefly discusses a letter composed under the hand of John Knox on the date of January 12, 1559. In this letter, Knox sketched out the core principles, as he would see them, of the reformation of the Church—a summary of all that he hoped to accomplish and as Robinson puts it, “the key to all his subsequent conflicts in Scotland.” Our passage today is drawn from Robinson’s article, “John Knox as the English and the Scottish Reformer,” which appeared in THE SOUTHERN PRESBYTERIAN REVIEW, 27.1 (January 1877): 11-12 of 26. [The spelling in Knox’s letter has been modernized somewhat.]

In his letter of exhortation to England, January 12, 1559, Knox developes the germinal principles of his scheme of Refor­mation. After declaring that Popish priests should not be allowed to direct the flock, that a plurality of benefices to one man should not be permitted, but the pastoral charges be given each to a single minister who shall be required to discharge fully the office of preaching Christ crucified, he proceeds to say— 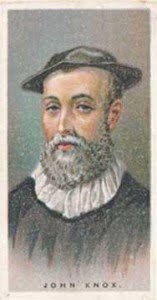 “Let none that be appointed to labour in Christ’s vineyard be entangled with civil affairs, and as ye call them the affairs of the realm. . . . For, as touching their yearly coming to Parliament for matters of religion, it shall be superfluous and vain, if God’s true religion be once so established, that after it never be called in controversy. . . . So that the ministers, albeit they lack the glorious title of lords, and the devilish pomp which before appeared in proud prelates yet must they be so stout and bold, in God’s cause, that if the king himself would usurpe any other authority in God’s religion than becometh a member of Christ’s body, that first he be admonished according to God’s Word, and after, if he contemn the same, be subject to the yoke of discipline. . . . Now last, for the preservatioun of religion, it is most expedient that schools be universally erected in cities and all chief towns, the oversight whereof to be committed to the magistrates and godly learned men, that of the youth, godly instructed among them, a seed may be reserved and con­tinued, for the profit of Christ’s kirk in all ages.”—[*McCrie’s Life of Melville, Vol. I., p. 213.]

Here, then, we have the germinal ideas of Knox’s programme of reformation, which will be found to be the key to all his subsequent conflicts in Scotland—an unsecularised ministry of one order only preaching Christ crucified, a spiritual free Church under Christ as its only Head, and education for not only the masses of the people, but education of the higher order, to secure an intelligent ministry. This last, if anything could be called such, may be termed “John Knox’s hobby.” And to his brave struggles and labors in that behalf, under God, has Scotland been indebted for the singular intelligence and intellectual superiority both of her people and her ministry for three hundred years past.

Words to Live By:
Our Lord Jesus Christ has promised that He will build His Church. (Matt. 16:18). When we see the Church in decline or even seemingly in ruins, the time for urgent prayer has long been at hand, for “unless the Lord builds the house, those who build it labor in vain. Unless the Lord watches over the city, the watchman stays awake in vain.” (Psalm 127:1, ESV). Our part is to pray and watch. Pray unceasingly, and watch expectantly, for we have His sure promise.

And from my favorite Anglican pastor, Richard Sibbes, this passage seems most appropriate in application of the life of John Knox:

” ‘Though an host encamp against me, my heart shall not fear.’ He puts the case of the greatest danger that can be. Though an host of men should encompass me, ‘my heart shall not fear; though war rise against me, in this I will be confident.’ Here is great courage for the time to come. Experience breeds hope and confidence. David was not so courageous a man of himself; but upon experience of God’s former comfort and assistance, his faith brake as fire out of the smoke, or as the sun out of a cloud. Though I was in such and such perplexities, yet for the time to come I have such confidence and experience of God’s goodness, that I will not fear. He that seeth God by a spirit of faith in his greatness and power, he sees all other things below as nothing. Therefore he saith here, he cares not for the time to come for any opposition; no, not of an army. ‘If God be with us, who can be against us?’ Rom. viii. 31. He saw God in his power; and then, looking from God to the creature, alas! who was he? As Micah, when he had seen God sitting upon his throne; what was Ahab to him, when he had seen God once? So when the prophet David had seen God once, then ‘though an host encamp against me, I will not fear,’ &c. Thus you have his comfort in the double branch of it; his courage, also, and his confidence for the time to come.