The following account has been freely edited from Fowler’s History of the Synod of Central New York (1877) and from the funeral discourse delivered by J. Trumbull Backus.

At Home in the Joy of the Lord

Union College in Schenectady, New York, was chartered in 1795 and held its first commencement in 1797, with Dr. John Blair Smith serving as the school’s first president, 1795-99. The younger Jonathan Edwards followed as president of the school, but only lived a dozen months or so after taking the helm [1799-1801]. Dr. Jonathan Maxey followed him [1802-04], but retired in 1804, and then came Dr. Eliphalet Nott, who still holds the record as having served Union College longest in the post of President [1804-66]. Fifty years following his inauguration, he remarked, “Some forty students scattered over the then village of Schenectady, meeting for educational purposes in what was then a cabinet-maker’s shop, with a single Professor, was the whole of Union College,” and it may be added, only sixty-three had graduated from it at that time.

He addressed himself to the raising of needed funds and the erection of needed buildings, as well as the establishment and filling of new departments, and he wonderfully succeeded in this part of his work, while as President he attracted crowds of young men, four thousand of whom were graduated during his presidency. 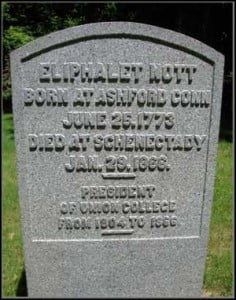 Though incessantly occupied by his duties to the college, Dr. Nott was much engaged in outside preaching, and considerably in ecclesiastical affairs, and in 1811 was chosen Moderator of the General Assembly. He entered cordially into the temperance reform, and was the constant dependence and counsellor of Mr. Edward C. Delavan in his large and liberal enterprises for this cause. He published occasional addresses and sermons, and in 1810 his “Counsel to Young Men,” which passed through numerous editions, and in 1847, “Lectures on Temperance.” In 1860 he went for the last time to his lecture room, and presided at Commencement for the last time in 1862. Infirmities were gathering upon him for many years previously, and his decline ended in fatal paralysis, January 29, 1866. “His dying counsel to his nearest friend was, ‘Fear God and keep His commandments,’ and his last words were, ‘Jesus Christ, my covenant God.’ “

The immediate expectation of death is usually a severe test of man; and Dr. Nott had been conscious of that condition for years. Since 1860 he felt that he was within a momentary summons to go home to his Lord. During much of this protracted period of awaiting and expecting, he was enough of himself to discriminate clearly, and cautiously consider his prospects. Clouds and apprehensions would sometimes intervene; but always there was reverent, cordial submission to the Divine will, and for the most part a sweet, humble, child-like fearlessness of trust and hope. It was the manifestation of a true, soul-sustaining Christianity; and a demonstration of his sincerity, an interpretation of his life beyond all scope for cavil or doubt–a priceless testimony to the covenant faithfulness of God. . . He was ever to the end a little child before God, most pleased to sit at Jesus’ feet, and confiding firmly, gratefully, in the sovereignty and loving-kindness of his gracious Lord. He is now at home in the joy of his Lord.

Historical Note: It was mildly interesting to note that there is some discrepancy regarding the death date for Dr. Nott. Some sources give January 25th as the date of his demise. Others state that he died on January 29th. Finally, a photograph of his gravestone was located and while grave markers have on occasion been chiseled with error, we will in this instance go with the date set down in stone.